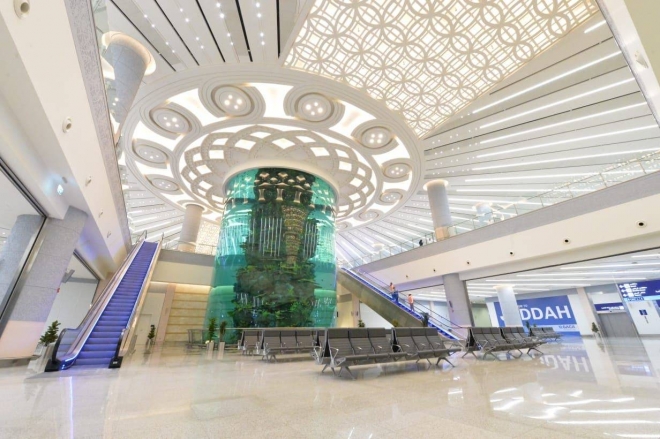 JEDDAH — The new airport in Jeddah now boasts of housing the world’s biggest airport aquarium containing a wide variety of about 2,000 rare fish. This has added to the beauty of the grand and the Kingdom’s busiest airport.

The new facility was inaugurated at the beginning of the Hijri year by Custodian of the Two Holy Mosques King Salman.

Ibrahim Al-Ruasa, spokesman of the General Authority of Civil Aviation (GACA) was quoted by alarabiya.net as saying that that the aquarium has a height of 14 meters, a diameter of 10 meters and a capacity of 1,000,000 liters. It contains a mixture of fresh water and German salt at a temperature of 26 degrees Celsius.

Al-Ruasa added: “The aquarium contains a variety of fish, some of which are rare. They total over 2,000. They include sharks, dogfish, Trevally, Triggerfish and Napoleon fish, which are fed automatically with fresh seafood and algae.”

The new airport has a total area of 810,000 sq. meters and a capacity of 30 million passengers annually in its first stage.

The designs of the new airport are characterized by architectural elements derived from the Saudi environment in general and the environment of Historical Jeddah in particular. Meanwhile, green areas have been cultivated around and within the terminals, hence, adding to the beauty of the airport facilities.

An indoor park with an area of 18,000 sq. meters has been set up, with the electric train station in the center. A fish pool has been constructed in the center of the Transport Center. It contains several kinds of coral reefs and fish species from the Red Sea. This will cause the viewer to link the airport (mentally) with the marine environment of Jeddah. Furthermore, it will be a beautiful, pleasant scene for the passengers.

KAIA is the main airport for pilgrims on their way to perform the Islamic pilgrimages of Haj and Umrah in the Islamic holy cities of Makkah and Madinah.

Saudi Arabia has been concentrating on expanding its tourism sector as an important step in diversifying its economy.

According to the International Air Transport Association (IATA), the number of domestic and international airports in the Kingdom has doubled to 28 airports.