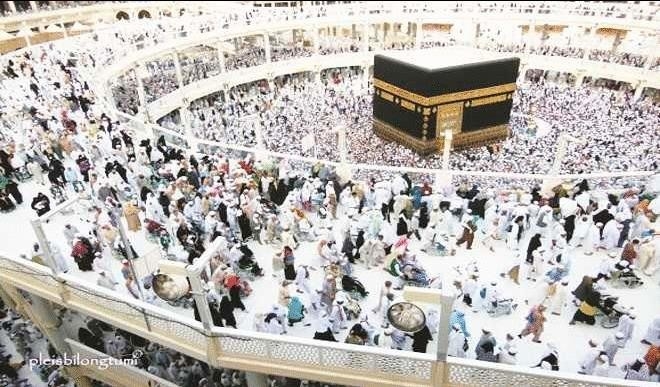 Nigeria has retains its 95,000 slot allocation for 2020 Hajj pilgrimage.

The spokesman of the National Hajj Commission of Nigeria (NAHCON), Fatima Sanda Usara, said on Saturday in a statement that this formed part of the Memorandum of Understanding (MoU) signed by Minister of State Foreign Affairs, Ambassador Zubairu Dada on behalf of Nigeria and the Saudi Arabian Minister of Hajj and Umrah, Dr. Saleh Bn Taher Benten who signed on behalf of the Kingdom.

She said the MoU was signed on 5th December 2019 preparatory to the year 2020 Hajj exercise.

“Prior to the signing event, Ambassador Dada conveyed President Muhammadu Buhari’s gratitude to King Salman Bin AbdulAziz and the Saudi Arabian authorities for compensating families of five dead and six injured Nigerians affected in the 2015 crane crash accident in Makkah.

“He expressed Mr President’s gratitude for the hospitality and support being enjoyed by Nigerian pilgrims. The Minister of State, Foreign Affairs further conveyed the president’s request to Saudi Arabia to assist NAHCON in every way possible, and to support its regulatory role in terms of pilgrims’ airlift to Saudi Arabia,” Usara said.

She said that the representative of NAHCON’s Acting Chairman and NAHCON Acting Commissioner of Operations, Alhaj Abdullahi Modibbo Saleh, delivered a message of gratitude to the Ministry of Hajj and Umrah on behalf of his Chief Executive Officer.

She stated that the Acting Chairman had sent appreciation for the brotherly cooperation his team had been enjoying.

“The Saudi Arabian Minister of Hajj and Umrah who led the Saudi delegation in the signing ceremony noted that he had been Deputy Minister of Hajj 20 years ago before rising to become present Minister and is, therefore, a witness to the tremendous progress that Hajj affairs has attained in Nigeria,” Usara said.

Meanwhile, part of agreements reached for 2020 Hajj includes a reminder on the e-track registration guideline.

The leader of the Saudi delegation re-emphasised that the Saudi Ministry of Hajj will not recognise any contractual agreement or payment done outside the e-track portal, as such is considered illegal and will not be recognised by the Kingdom.

Also, part of the disclosures was that pilgrims could pay an optional 100 Saudi Riyals or more as insurance cover for any accidents, loss of property and other risks they may face while on Hajj.

This does not, however, include medical care as the Kingdom grants free health care to every pilgrim while in the Holy Land.

She added, “On the clarification on visa fees, the delegation declared that the amount charged is 300 Riyals for all types of visas. However, the validity of the Umrah and visit (tourism) visas do not extend to the Hajj period.

“Issuance of such visas ends shortly before the onset of Hajj season. Mr Mishat commended NAHCON for its effort in controlling visa violation and pilgrims absconding in the Kingdom.

“NAHCON delegation was informed that new policies will be conveyed to the Commission via the ministry’s official platform thus called for more collaboration between the Commission’s ICT unit and that of the ministry.”

On the shortage of toilets being experienced during the Mina outing, known as Masha’ir, Mr Mishat assured that for 2020 Hajj, additional 60,000 toilets will be constructed by the Kingdom in order to address the problem.


⇐ Previous:
Iranian official off to Saudi Arabia for talks on major Hajj ritual
Next: ⇒
Muslims concerned about $100 change