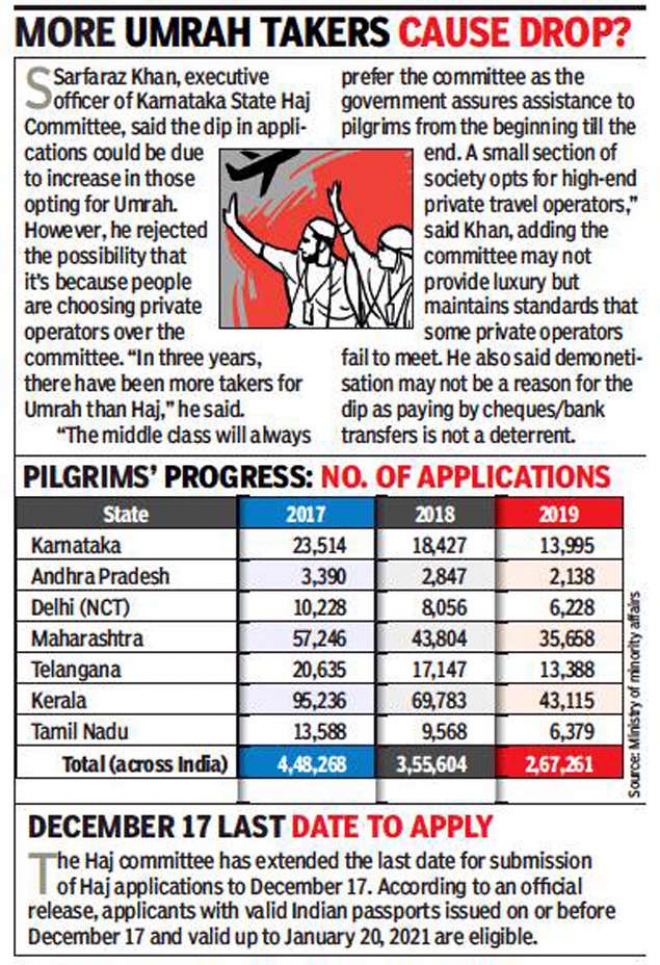 However, the falling number of applications from Karnataka tells a different story. According to experts, the reasons range from rising airfares to scrapping of Haj subsidy and slowing down of the economy.

Some opting for  Umrah instead

Ayub Ahmed Khan, an advocate and convener of NGO Vision Karnataka, said:“People are opting for Umrah instead of Haj. The pilgrimage takes15-20 days, costs less and people don’t have to negotiate huge crowds.” A Haj pilgrimage lasts 45 days. While it is considered obligatory, Umrah isn’t.

A senior official said red-tapism in government procedures and below-par facilities are also pushing pilgrims to private operators. He added: “Private operators provide food and better services. If people are unable to pay as much, they go on Umrah.”

Sayeedur Rahman of Baitullah Tours International in Cubbonpet said, “The ones who can afford to go on Haj are moving towards private operators, with packages starting from Rs 3.5 lakh and going up to Rs 8 lakh.”

But overall, he said, post demonetisation, pilgrims are finding it difficult to manage finances as it’s compulsory to make the full payment by cheque or bank transfer. “This has impacted travellers who are taking a step back,” Rahman said reiterating that while the air fare for Umrah is around Rs 30,000, one has to shell out between Rs 60,000 and Rs 81,000 for Haj air travel.

A private tour operator on condition of anonymity told TOI the Haj committee takes pilgrims to Mecca and Madina but doesn’t offer food or proper transportation. “The subsidy was an eye wash. After it was scrapped, the Air India fare is Rs 81,000, while Saudi Airlines charges Rs 60,000. It shows even with subsidy, Air India was not cheaper than private airlines. The government must end Air India’s monopoly,” the operator said.
‘Dip could be due to more Umrah takers’

S Sarfaraz Khan, executive officer of Karnataka State Haj Committee, said the dip in applications could be due to increase in those opting for Umrah. However, he rejected the possibility that it’s because Hajis are choosing private operators over the committee. “In three years, the number of Umrah takers has been more than Haj pilgrims,” he said.
“The middle class will always prefer the committee as the government assures assistance to pilgrims from the beginning till the end. A small section of society opts for high-end private travel operators,” said Khan, adding the Haj committee may not provide luxury but maintains standards that several private operators fail to meet.

He also said demonetisation may also not be a reason for the dip because paying by cheques/bank transfers is not a deterrent for pilgrims.