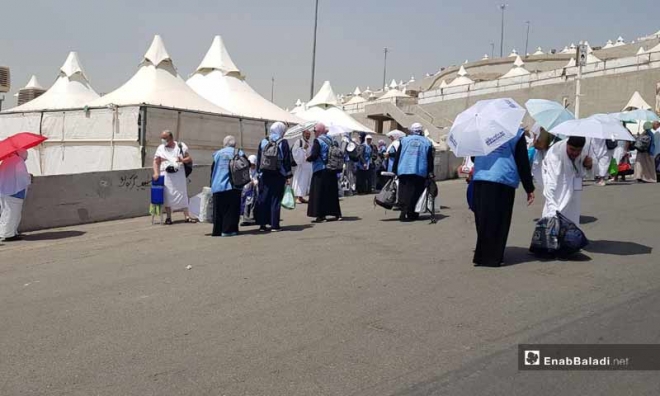 The initial registration stage for the 2020 Hajj season for the Syrians begins on 7 January, after the High Hajj Committee affiliated with the Syrian National Coalition (SNC) set all the procedures for the Hajj season including the registration conditions, points and fees.

The Committee demonstrated, through its official website and social media platforms, the registration steps for the Syrian pilgrims, by creating a family registration application for a maximum of four people, according to accepted kinship. Thus, the application is registered in the name of the oldest family member.

The initial registration should be made by one of the persons mentioned in the application form, or by an authorized group administrator, and then the pilgrim shall receive the family application, registration card, and the receipt of an official, publicized receipt from one of the Committee’s offices inside or outside Syria.

The Committee requires the applicant to be a holder of a Syrian passport and physically able to perform the hajj rites alone and at the responsibility of the group’ head. In case the pilgrim cannot perform the rites by him or herself, then he/she must present an acceptable escort, who complies with the conditions.

A woman is required to take a legal mahram (unmarriageable kin) with her, for those who are under the age of 45 (born 1 April, 1975 and later). Thus, women, who already went to hajj before, are not permitted to register again with a group of other women.

The applicant must not have gone to Hajj from 2016 onwards, except for a man, who will be the mahram of his mother or wife, who is going to hajj for the first time. The family application must include permissible relationship of kinship, which is (father, mother, son, daughter, wife), which will be demonstrated in a table, issued by the Committee later.

The initial registration fee (non-refundable) paid in the commission’s offices varies in Syria and neighboring countries, and is shown according to the attached info-graph.

The High Hajj Committee approved registration offices, which are located in Syria and the neighboring countries, and identified two centres, the first in Bab al-Hawa, Idlib, and the second in Bab al-Salameh, in Azaz, the countryside of Aleppo.

In Turkey, there are four centers, namely Istanbul, Gaziantep, Rehaniyyah, and Mersin. In Lebanon there is the Beirut centre, in Jordan the Amman centre, and in Egypt the Cairo center, in addition to centers in the UAE, Qatar, Kuwait, and Erbil; while those seeking Hajj within the opposition controlled areas can apply in one of the registration centers in the neighboring countries.

At the initial registration, the country of departure of the Syrian pilgrim is determined, and it cannot be changed when paying the hajj costs. The pilgrim receives the list of groups approved upon registration, and then he chooses one of the lists upon the final payment. Afterward, the pilgrim’s fingerprint must be taken at the payment stage in order to be attached to his or her information and photo.

As for those registered at Bab al-Hawa crossing on the Syrian-Turkish border, they can only enter through the crossing, and travel from Hatay Airport to the south of the country (according to arrangements made by the Turkish Foreign Ministry).

The registration office requires a Syrian passport, valid for the date of February 1, 2021 and beyond, upon payment, while the passports extended by the SNC’s stamp will not be accepted; in addition to two personal colored photos with a white background, measuring 4 x 3 centimeters, and a copy of a proof for the relationship of kinship in the mahram application. Thus, the original proof must be brought upon payment.

The Committee also explained, in a statement published via its official social media accounts, that it would reject the application of those who provide false identification documents and whoever helped in this, and will not bear any material or moral responsibility for any problem related the passport at one of the airports, crossings or anywhere else.

The Committee had signed an agreement for arrangements for the affairs of the Syrian pilgrims for the 2020 Hajj season, with the Saudi Deputy Minister of Hajj and Umrah, Dr. Abdel Fattah bin Suleiman Mashat, on  December 25, 2019, following an invitation made by the Saudi ministry to the SNC.

The Saudi Ministry of Hajj and Umrah decided to grant 22,500 Syrian pilgrims access to hajj rites next year, while the High Hajj Committee submitted a request to increase this number. Thus, the Saudi side promised to study this request, according to a previous statement issued by the Syrian side.