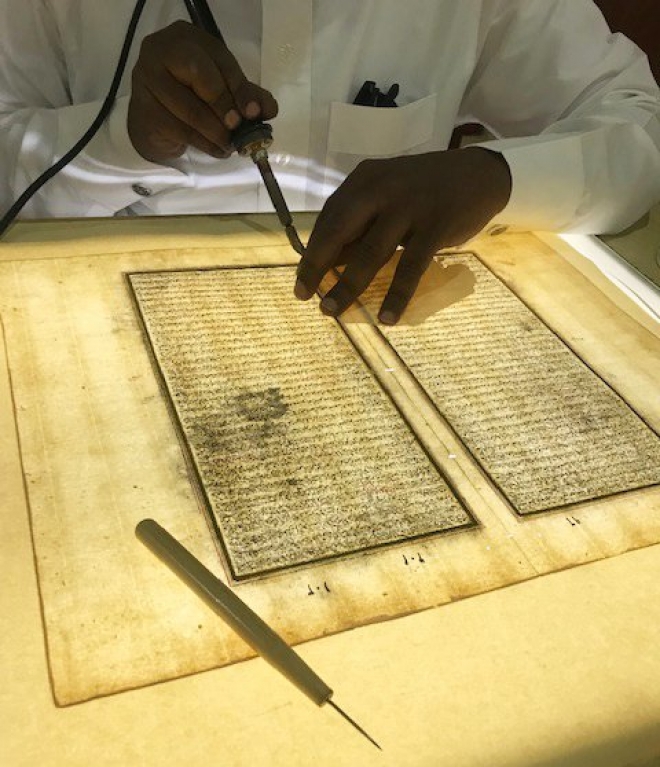 Historical documents at risk of neglect are being restored with the help of the King Salman bin Abdul Aziz Center for Historical Materials Conservation, with many government and private entities seeking the center’s assistance.

In an exclusive interview with Arab News, the director of the center, Abdulrahman Al-Baiz, described how archive departments at many governmental and private entities are neglected.

“Documents are usually piled up in archive rooms without taking special care — they usually choose the worst place in the building to make into an archive room. They also hire employees ill-suited to work in their departments.”

Located in Riyadh, the center was opened by King Salman in 2004, when he was the governor of Riyadh. The center, which is part of the King Abdul Aziz Foundation for Research and Archives (Darah), was very small back then, but with the right technology, time, and development, they expanded.

One of the first projects was the restoration of documents for the Ministry of Justice.

“The first contract we made was with the Ministry of Justice, for the Holy Mosque expansion project during King Abdullah’s time,” said Al-Baiz.

He mentioned that when the government started the projects, they had to go back to old records and documents, created before the establishment of Saudi Arabia, and written in the Ottoman language, in Makkah.

“We started restoring these documents one by one so that they could use them at the Ministry. The letters were in Arabic, but we didn’t understand what they were saying,” he said.

“We worked on almost 79 documents for four to five years. We later expanded our project and worked with a number of others, one of which was Um Al-Qura newspaper from its first edition until 1980. Most of the editions are now on the center’s website as an electronic archive for researchers,” he added.

Fun to work on

Thamir Al-Shuwaie, assistant director of the center, told Arab News how it was fun to work on Um Al-Qura’s stories. “It is history — the simplicity of the news and stories is amazing. It was also fun to see how advertisement pages were back then.”

The center’s work is not limited to preserving the department’s holdings, but also extends to preserving heritage that exists among citizens, and public and private libraries. Its doors are open to the public to restore and retrieve personal documents, books, and manuscripts.

“They can come with their personal materials and we start evaluating the pieces and decide on a suitable price. It’s then up to the client if he or she wants to save the document in the center or not,” said Al-Baiz.

The center also has an agreement with the Ministry of Interior, where they are establishing nine institutes, to consult on purchasing and installing machines and training employees on how to restore their documents.

“Employees come and take courses here in the center, and then apply what they have learned in their labs,” said Al-Baiz.

The center has recently opened its doors for training to women in this field, and has also trained people from other countries such as Algeria and Oman. “We also have an agreement with the US Library of Congress,” Al-Baiz added.

Patience and calm are the two key factors that need to be taken into consideration when working in archiving. The process of which a paper is treated depends on the state of the piece itself — some arrive burned, while some have been eaten by insects. Others are faded, brittle, have deteriorated with time and need special care.

Documents are usually piled up in archive rooms without taking special care — they usually choose the worst place in the building to make into an archive room. They also hire employees ill-suited to work in their departments.

“One paper sometimes takes 2 or 3 days to work on; therefore, whoever works in this field must be patient,” he said.

“We usually work on papers one at a time, so imagine if someone brings a box full of papers or a script, it will take from 3 to 5 weeks to process it. Some could take up to 6 months,” he added.

Al-Shuwaie pointed out that 20 manuscripts used to take up to 2 years, when they used basic materials and had to do everything manually.

“Now we have developed our labs and we can take 35 manuscripts a year,” said Al-Shuwaie. “You can find interesting information in these manuscripts, but we have a strict confidentiality policy so we can’t reveal it to the public.”

Al-Baiz said that they have worked with Naif Arab University for Security Sciences’ Criminal Department, as they have a whole department for forged documents.

“We have worked on cases with them. We managed to get essential information about cases we worked on,” he said.