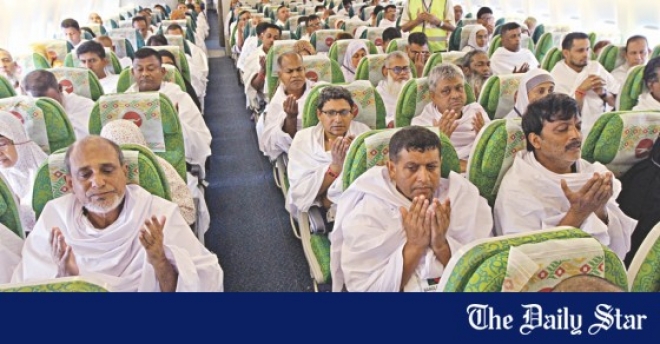 The Hajj Agencies Association of Bangladesh (Haab) today criticised the civil aviation ministry's proposal to increase airfare for each Hajj pilgrim by Tk 12,000 this year, terming the proposal “illogical and immoral”.

Top leaders of Haab, a platform of the country’s Hajj agencies to carry Hajjis to Saudi Arabia, came up with the remark today at a press conference.

To back his statement, the Haab president said during other times of the year, the airfare on Dhaka-Saudi Arabia-Dhaka route is around Tk 44,000 to Tk 57,000.

“As the aircrafts dedicated for carrying Hajj pilgrims return empty from Saudi Arabia, the airfare during Hajj could be maximum Tk 88,000 to Tk 1,14,000,” he said.

Shahadat Hossain said it would have a negative impact on the total Hajj management if airfare of Hajj pilgrims is increased illogically.

He also demanded Prime Minister Sheikh Hasina’s intervention in this regard so that airfare of Hajj pilgrims is not increased this year.

The Haab leaders said the civil aviation ministry has increased the airfare of Hajj pilgrims this year to cover up Biman Bangladesh Airlines’ losses that it suffers from other business sectors.

Biman Bangladesh Airlines usually ferry half of the Hajj pilgrims every year, while the Saudi Arabian Airlines carry the rest of the pilgrims.

A total of 1,37,198 Bangladeshi pilgrims are scheduled to perform Hajj this year, scheduled to take place on July 31 based on sighting of moon.

“If the pilgrims’ air fare is hiked, then the cost of total Hajj package will also go up. This will also create burden on the pilgrims,” Haab President Shahadat Hossain said while talking to The Daily Star today.

Many Bangladeshis will not be able to perform Hajj due to the high costs, he added.

An official of the religious affairs ministry said they did not agree with the civil aviation ministry’s proposal to illogically increase of the airfare of Hajj pilgrims this year as the Saudi government did not impose any new charge for this year's Hajj and the price of jet fuel also did not increase.

“The oil price has declined in the world market. In such situation, raising airfare for Hajj pilgrims this year is not logical,” he said whishing anonymity.

Earlier on Sunday, Secretary of the Civil Aviation and Tourism Ministry Md Mohibul Haque placed the proposal at an inter-ministerial meeting.

Haab leaders at the meeting protested the ministry’s proposal. As the civil aviation ministry remained rigid on their proposal, HAAB leaders at one stage walked out from the meeting, sources told The Daily Star.

As a result, the meeting was adjourned and the matter of fixing pilgrims’ air fare remains undecided.

The civil aviation ministry recently rescheduled the price of airfare of Hajj pilgrims at Tk 1,40,000 which was also rejected by the Haab.

Both the Religious Affairs Ministry and Haab said the proposed airfare is two to three times higher than the normal fare on Dhaka-Saudi Arabia route.

The government is yet to announce the Hajj package for this year.


⇐ Previous:
Hajj cost may increase to Rs550,000 this year
Next: ⇒
Watch 3D Movies About the Life of Prophet Muhammad in this Museum in Medina, Saudi Arabia