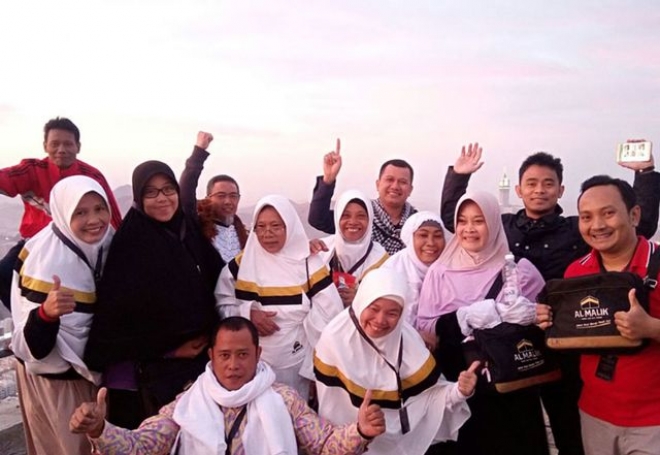 Indonesian pilgrims pose for a photo during the umrah or the minor pilgrimage to the holy city Mecca. (Photo courtesy of Umroh.com)

Indonesian pilgrims pose for a photo during the umrah or the minor pilgrimage to the holy city Mecca. (Photo courtesy of Umroh.com)

With Indonesia as the country with the largest Muslim population, the umrah - the minor pilgrimage to the holy city Mecca - has always been considered as a lucrative business opportunity. To stand out in the competitive market, Umroh.com puts their focus on ease of access for the would-be pilgrims.

"What sets us apart from the rest is that we provide access in various platforms - such as through website and Android - as opposed to our competitors who mostly only embark on one of those platforms," Felicia, Umroh.com public relations specialist, told the Jakarta Globe in Jakarta on Tuesday.

Their findings of how the majority of its users accessed the website on iPhones kickstarted the development for the iOS version. Soon to be launched, the version is currently undergoing the debugging process.

The frequent update on the available packages becomes a selling point on its own, Felicia said.

These packages are available in three different categories - the Regular Umrah, Umrah Plus Trip, and Halal Trip. Straying away from the umrah aspect of the business, Halal Trip targets tourists seeking to enjoy a Muslim-friendly travelling experience such as by assuring the availability of halal restaurants.

Meanwhile, Muslim millennials and their families are considered to be the startup's target market. Being the tech savvy generation, they mainly use the app to assist their families in purchasing a package.

The availability of a savings feature is also targeted to help these youth in planning ahead for their umrah.

"The trend shows that pilgrimage is mostly carried out by older people. There is also a growing tendency for millennials to think that pilgrimage is something that is still far ahead in their agenda. With the savings feature, however, they can save money little by little for an umrah package. With this, their perception that umrah savings is impossible at their age can be changed," Umroh.com public relations specialist Anggita said.

The umrah market has been shaken up by frequent umrah scams, most notably the case involving First Travel agency who had taken Rp 848 billion from its customers. In assuring the customer trust, Umroh.com has partnered with 50 travel agencies that have been licensed by the Religious Affairs Ministry.

"The selection for the partnership is very thorough. Aside from the obligatory license from the Religious Affairs Ministry, we must ensure their activity. If they have not sent off a pilgrim within a year, they will be taken out," Anggita said.

Since its launch on Dec. 2018, Umroh.com has sent an estimated 500 pilgrims to the holy city. They have also partnered up with the ride-hailing app Grab in sending their drivers on pilgrimage last year.