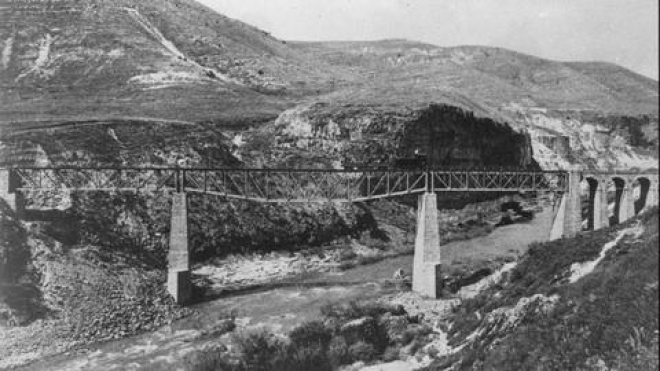 On 1 September 1900, the construction of a major railway in the Ottoman Empire commenced. The Hejaz Railway, set to connect Damascus and Medina, was conceived of as a project of both religious and strategic significance.

The new railway was aimed at facilitating convenient and efficient travel for Muslims making the pilgrimage to Medina in present-day Saudi Arabia for Hajj. It would also further strengthen the central government's control over distant territories in the empire.

Though the idea had been around for some time, Sultan Abdulhamid II took a keen interest in bringing the project to fruition. Timed to coincide with the anniversary of his ascension to the throne, the beginning of the railway construction inaugurated one of the last major infrastructure projects in the Ottoman Empire.

The Hejaz railway was to be the embodiment of Abdulhamid II's pan-Islamic outlook. It generated fascination within the Ottoman Empire and beyond.

The sultan's project was also the Caliph's project and the call to Muslims across the globe to contribute financially did not fall on deaf ears.

In addition, to support within the Ottoman Empire, backing for the project came from Muslims in India. In Southeast Europe, Bosnian Muslims too rose to the occasion. They had been living under Austro-Hungarian rule since the Berlin Congress of 1878. However, the spiritual and symbolic links between Bosnian Muslims and Istanbul remained.

Not long after the railway construction began in 1900, Bosnian publications Behar and Bosnjak started featuring news reports about the importance of the project. Both publications hailed the project as necessary not only for the Ottoman Empire but for facilitating a more comfortable journey for Hajj. News reports from that period indicate that Bosnian Muslims had begun donating to the project.

A concerted effort in Bosnia began in November 1905 with the establishment of a committee in Sarajevo to collect donations for the Hejaz railway. The beginning of this committee's work coincided with the holy month of Ramadan.

Donations were collected in Sarajevo's central Begova mosque. From mid-November 1905, Bosnjak regularly published lists of benefactors of the Hejaz railway. The lists provided both a measure of transparency and a call for others to spring into action.

Among the benefactors were prominent historical figures including the mayor of Sarajevo Esad Kulovic and mufti of Bosnia, Mehmed Teufik Azabagic. Most interestingly, the highest sum (500 Krone) was donated by a Bosnian Muslim lady Tahira Tuzlic. The lists feature several other Muslim women benefactors of the railway.

The effort to collect donations in Sarajevo lasted from mid-November 1905 through early March the following year. More than 900 people donated for this cause over four months.

Apart from Sarajevo, committees for the collection of donations were established in other Bosnian towns of Banja Luka, Sanski Most, Trebinje, Tesanj and Visegrad and worked until June 1906. The collection effort was not limited to the capital but was more widespread.

The eight-year construction was completed with a line to Medina in 1908, and the railway was operational until the outbreak of World War I in the Middle East theatre. In the Arab revolt of 1916, the railway was attacked by TE Lawrence and Arab forces. This event was immortalised in the 1962 film, Lawrence of Arabia.

The effort to collect donations from November 1905 to summer 1906 in Bosnia shows that the Hejaz railway project generated interest and support in this part of Europe. That the project was a waqf (endowment) meant to facilitate more accessible travel for Hajj pilgrims was the prime motivation for the support it gathered.

Despite living in Austria-Hungary, Bosnian Muslims financially supported one of the most significant infrastructure projects in the final decades of the Ottoman Empire.