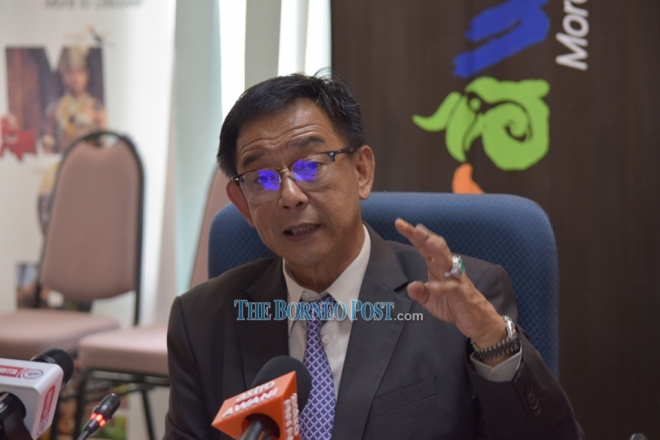 KUCHING: Muslims in Borneo will be able to perform their ‘umrah’ without having to transit in Kuala Lumpur once the direct flight from Kuching to Jeddah takes off this year, says Tourism, Arts and Culture Minister Datuk Abdul Karim Rahman Hamzah.

This direct flight, he said, is expected to commence either in April or May.

“The direct flight will be from Kuching to Jeddah, so Muslim pilgrims from Sarawak do not have to transit via Kuala Lumpur,” he told The Borneo Post in an interview at his office at Baitulmakmur Building here, recently.

He said the Sarawak government is looking into Kuching as an ‘Umrah Hub’, which will start soon with an airline from the Middle East.

“Apart from Sarawak, Muslims pilgrims from Kalimantan and maybe Pulau Jawa, Indonesia, Sabah and Brunei will also be able take this direct flight,” he added.

On Dec 30 last year, Abdul Karim witnessed the signing of a Memorandum of Understanding (MoU) between Sarawak Tourism Board (STB) and ATS Global Travel and Charter Sdn Bhd, to arrange the flights for the ‘haj’ route (covering Jeddah and Medina) as an effort to make Kuching an ‘Umrah Hub.’

He had said then that the state’s expectation is for Kuching to become a transit point for a minimum of 100,000 to a maximum of 300,000 ‘umrah’ pilgrims, which should translate into RM50 million to RM150 million in annual revenue for Sarawak.

“This is simply assuming that each passenger spends RM500 in Kuching, taking into consideration the night-stop expenses, transfers and pre-departure tours to the Holy Land.”

He also said Sarawak could look forward to being recognised as another regional hub for the ‘haj’ route and that tourism could leverage on this programme to improve the connectivity into Kalimantan and Jakarta in Indonesia.


⇐ Previous:
Citilink opens new international routes to Jeddah, Kuala Lumpur
Next: ⇒
On your way to a hassle-free pilgrimage