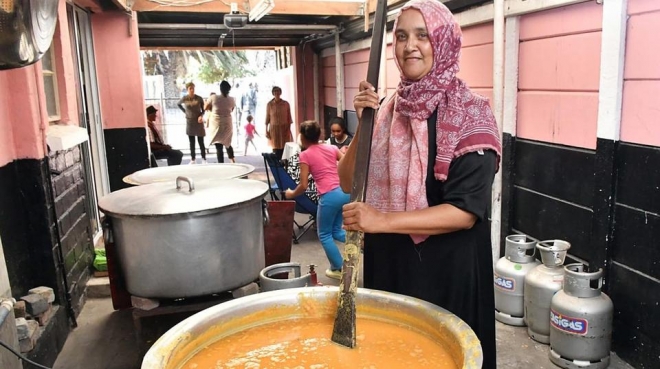 Religious leaders are calling on Capetonians to help a Manenberg mother, who feeds about 800 hungry residents each week, achieve her dream of visiting Mecca and do her umrah.

After selflessly serving her community for more than 12 years, Hameda Williams, 47, has been dubbed “the woman with a heart and a pot of gold” as she dishes up the tastiest chicken dahl each week.

The soft-spoken mother of five, with the help of her husband, Nazeem, 50, spends thousands of rand out of her own pocket to feed those less fortunate, never seeking a reward for her community work.

Hameda, who grew up in Manenberg, says she was inspired by her mother, Kulsum Patton, who used to hand out soup once a month.

In 1993, Hameda married Nazeem and the couple moved to Durban for several years. They later returned to Cape Town and moved into their home in Tagus Road in 2008.

Armed with an array of spices and taught by Indian aunties how to make the perfect dahl, Hameda set up her plans to feed her community.

Now, 12 years later, every Tuesday her home is surrounded by hundreds of hungry children and elderly people who come to get a bowl of warm dahl and bread.

“During Ramadaan, the Claremont Road Masjied sponsors us for the whole month, so then we are able to cook twice a week,” she says.

“But normally, every Tuesday, we cook 300 litres of dahl. We go to Osman’s spice and buy 25kg per pot,

“I use spices, chicken bones and whatever I can get my hands on. I get 50 loaves sponsored and each week we have about 800 people coming.

The friendly woman says she follows a strict protocol when serving residents and always ensures that pensioners and children are fed first.

During the gang wars, she says, she feeds skollies first not to place others in danger.

Moulana Sameeg Norodien says the couple are a blessing in the community.

“For all these years, they have been doing this never asking for anything,” he says.

“They would really like to go on umrah, but they will need about R20 000 each.

“They bring positive change to our community and it would be great if they could get help.”

While Hameda admits she would like to go to Mecca, she says she cannot stop her weekly feeding scheme.

“One day, I would like to open a feeding scheme where destitute people can come, have a shower and have breakfast or maybe a warm supper.

“I would like to go on umrah but I could never think of stopping the weekly handout..”


⇐ Previous:
Priority in census for people at Haram, hospitals
Next: ⇒
2020 Pilgrimage to Mecca to Cost Moroccans MAD 50,445