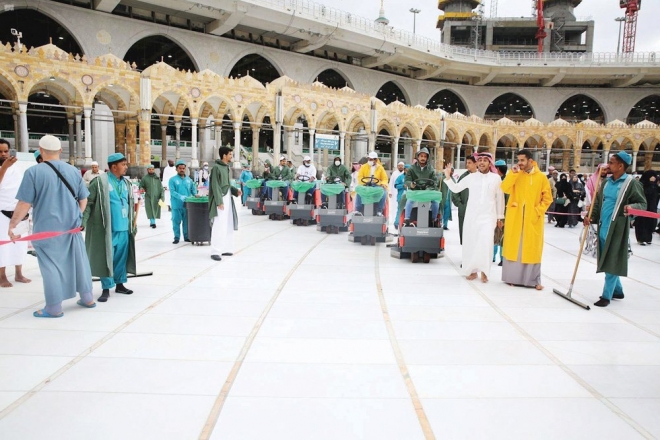 MAKKAH: The General Presidency for the Affairs of the Two Holy Mosques has announced its readiness to deal with any epidemic cases. It said that it will provide all necessary information to pilgrims and has doubled cleaning times of the courtyards and corridors of the Grand Mosque in Makkah.

The presidency said that it is raising media awareness in all languages and through informative screens to distribute the latest medical instructions and emergency developments.

Abdulhamid Al-Maliki, assistant undersecretary for services affairs at the presidency, told Arab News that the Two Holy Mosques are collaborating with public health authorities to face all possible situations.

Al-Maliki said that he has been working hand-in-hand with governmental and private agencies to distribute masks and hand sanitizer.

He added that coordination has been made with public health-related bodies to mobilize the necessary media coverage to inform all pilgrims of different nationalities wherever they may be.

The assistant undersecretary said that responding to all instructions and advice is necessary for the best handling of health issues.

Crowd expert Akram Jan said that Saudi Arabia has gained experience in dealing with crowds and millions of people, and that it was prepared to handle several sudden scenarios as well as the most difficult situations with success.

Jan said that the difficulties that accompany the presence of viruses — such as the new coronavirus — are their ability to spread and infect through contact or sneezing. He added that the Kingdom is taking precautionary measures to prevent a disaster from happening.

The floors of Makkah’s Grand Mosque are washed and disinfected four times daily as part of measures to ensure the safety of pilgrims and visitors.

Highly qualified cadres use the best technology and cleaning and sanitizing tools, said Jaber Widaani, director of the mosque’s department of disinfection and carpets.

There are 13,500 prayer rugs at the mosque, all of which are swept and fragranced on a daily basis, he added.

Since the new coronavirus emerged in December 2019 in central China, it has sickened 82,000 people globally, with more than 2,700 deaths. The illness it causes was named COVID-19, a reference to its origin late last year.

Middle East countries have been implementing measures to protect their citizens and residents from the rising coronavirus cases.

The announcement came after the Kingdom placed a temporary ban on pilgrims from entering the country to perform Umrah, in an effort to prevent the spread of coronavirus.

Nearly 7 million Umrah pilgrims visit the Kingdom each year, the majority of whom arrive at airports in Jeddah and Madinah.