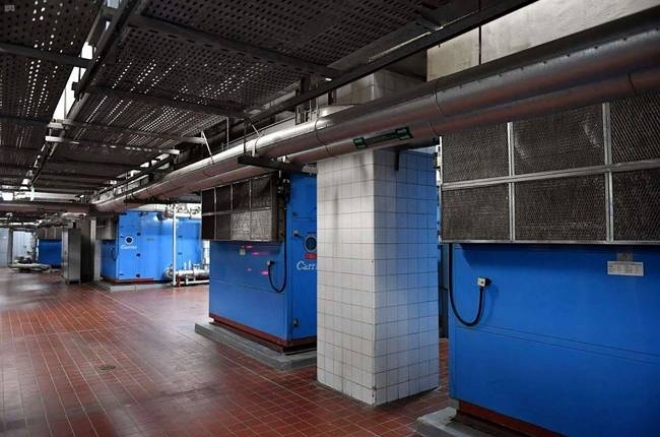 MAKKAH — The Presidency for the Affairs of the Two Holy Mosques is carrying out cleaning of the air conditioning inside the Grand Mosque in Makkah nine times a day, and sterilizes it with ultraviolet radiation before it is sent to the relevant areas of the holy mosque through special air conditioning equipment.

The process of purifying the air completly is being carried out through three phases — withdrawal of natural air from the surface of the Grand Mosque by exhaust fans and it then reaches the refrigeration units for cooling, which is interspersed with process of heat exchange.

This process uses water for cooling through water pumps that reach the Grand Mosque from the Shamiya and Ajyad regions, and the air is purified before entering the cooling process through three other filters.

After that the air is transferred to the second air conditioning units to cool the air again through heat exchangers, and it is purified for the third time through three filters.

Then it is transferred to the sterilization stage through various devices that work with ultraviolet radiation. This process guarantees the safety of visitors and pilgrims of the Grand Mosque with destruction of germs and microbes.

The cooling process is effected through 344 air-handling units for refrigeration located in two sites within the Grand Mosque.

The Presidency has replaced 75 percent of the heat exchangers in the second Saudi expansion of the Two Holy Mosques and work is under way to replace the remaining exchangers within its precautionary plan to ensure the safety of pilgrims and visitors from the spread of epidemics and diseases.

Highly qualified engineering and technical teams are in action to undertake maintenance and cleaning operations.

The Ajyad station produces 35,300 tons of cooling, of which about 24,500 tons are used while the second one — the new central station — has a capacity of 120,000 tons of cooling, which is currently feeding the third Saudi expansion of the Grand Mosque, and half of the masa area.

The Presidency provides backup cooling stations in addition to the main stations to maintain the specified temperatures in the event of the failure of any one of the stations so as to ensure the purity of the air distributed inside the holy mosque.