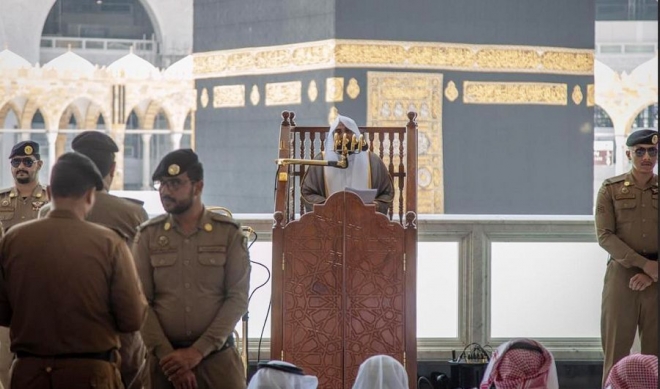 MAKKAH: Muslims performed Friday prayers at the Grand Mosque in Makkah and the Prophet’s Mosque in Madinah for the first time since restrictions aimed at preventing the spread of coronavirus were announced by Saudi Arabia.

During the Friday sermon at the Grand Mosque, Sheikh Abdullah Awad Al-Juhani said that the emergency procedures being taken by the authorities to prevent the spread of the virus were in accordance with Shariah law.

On Thursday, the Kingdom announced a raft of measures to protect worshippers from being infected with the virus. These include closure of the Two Holy Mosques an hour after the Isha prayer and re-opening an hour before the Fajr prayer.

Other measures include the temporary closure of an area surrounding the Kaaba, where worshippers undertake a ritual walk, and between the hills of Safa and Marwah, where they perform a ritual called Sa’ee.

The Sacred Chamber in the Prophet’s Mosque in Madinah, which houses the graves of Prophet Muhammad and his two companions, will also be closed to worshippers.

The General Presidency for the Affairs of the Two Holy Mosque confirmed that following the ban on Umrah, visitors entered the Grand Mosque smoothly through 76 doors, unlike the usual Fridays when 80 doors are used.

The director of the Grand Mosque’s gates department, Fahd Al-Juaid, said that in cooperation with security agencies, visitors who came to the mosque to perform Friday prayer entered and exited the squares smoothly.

The presidency used its media outreach in all languages, as well as live screens to follow up on medical guidelines and new developments in coordination with government agencies, he said.

A crowd of worshippers prayed on the ground and top floors, as well as roofs, in addition to the northern expansion area of the Grand Mosque.

Al-Juaid said that precautionary measures help to ensure worshippers’ safety and safe return to their families.

Mohammed Batti, director of field supervision at the Grand Mosque, said that workers at the site are undertaking additional roles to help meet safety requirements for visitors.

Precautionary measures included ensuring that food and drinks are not brought inside the Grand Mosque, as well as closing the Zamzam water dispensers and preventing sleeping at the mosque.

Those concerned with providing a safe, healthy environment and carrying out decontamination are working in coordination with the relevant authorities in case of emergency, he added.

The Kingdom imposed a ban last week on overseas pilgrims visiting the Grand Mosque in Makkah and the Prophet’s Mosque in Madinah. Later, the authorites also suspended the pilgrimage for Saudi nationals and expatriates.

Saudi health authorities have urged all those who have traveled to places affected by the virus to call 937 in order to ensure their health and the health of their families. An early disclosure of content with infected people will help to contain the virus, they said.

Saudi tourism chiefs also put a temporary halt on the issue of visas to visitors from countries worst hit by the deadly coronavirus outbreak.

The Ministry of Tourism announced that for the time being the Kingdom would no longer be approving passes for travelers from China, Italy, Korea, Japan, Malaysia, Singapore and Kazakhstan.

The World Health Organization noted that the Kingdom’s moves would enable Saudi Arabia to implement sustainable measures to control the virus and protect crowds during this important season.


⇐ Previous:
The historic village of Asham tells the story of the early times of Islam
Next: ⇒
‘Temporary suspension of Umrah compliant with Shariah’