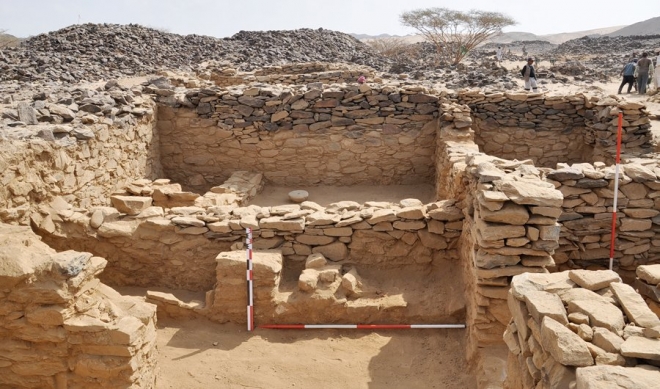 The archeological site of Asham is located on the ancient pilgrimage route running along the Red Sea coast from Yemen to Makkah. The historic village lies 300 km south of the holy city and links the Tihamah plain in the west to the mountains in the east.
Asham tells the story of the early times of Islam and is considered an extension of Makkah’s civilization and historical events.

Convoys leaving or entering Makkah used to pass through the village and its name has become associated with Makkah in history books. Today it is considered an important historical and archaeological landmark.

Pre-Islam Asham was famous for its metal industry and covered an area of 1,500m by 600m from east to west. Its houses were built with blocks of volcanic stone arranged one on top of the other without the use of mortar, giving them their distinctive black color.

Around 100 houses of various sizes have been identified at the site, along with a cemetery to the east of the village which contains graves richly decorated with Kufic inscriptions.

A vast array of fragments of pottery dating from pre-Islamic times through to the early fifth century (Hijri) have also been found at Asham.