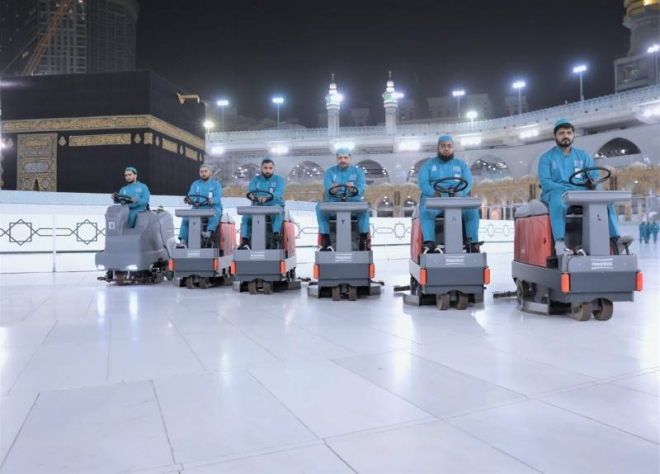 MAKKAH —The workforce for sanitizing the Grand Mosque in this holy city has been increased to 450, the General Presidency for the Affairs of the Two Holy Mosques said Tuesday.

Earlier reports in a section of the press said a 330-member sanitizing team is engaged in cleaning, sanitizing and incensing the Mataf and other areas of the Grand Mosque, Saudi Press Agency (SPA) cited the presidency as saying Tuesday.

The Sterilization and Carpets Administration wing of the presidency is meticulously sanitizing the Grand Mosque daily using environment-friendly sanitizers to ensure that the environment and human beings are not affected.

The cleaning and sanitization process ensures the safety of worshipers and visitors to the Haram by eradicating all viruses and microbes stuck on the floors and surfaces of facilities and implements used in the Grand Mosque and its piazzas.

This forms part of various precautionary measures implemented to prevent any infection by the new coronavirus (COVID-19) in the Grand Mosque, its piazzas and the surrounding areas.

The sanitizing team, especially trained for the purpose, has been divided in three shifts where workers are engaged around-the-clock.

The presidency added that it conducts several necessary tests on the sanitizers and detergents, before starting the cleaning and sterilization process.