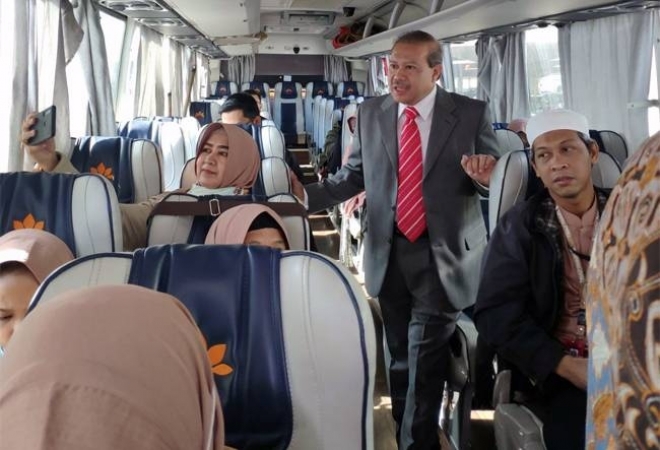 Diplomatic missions and aviation companies from several countries are racing against time to facilitate the smooth return of the last batches of their Umrah pilgrims from the holy cities of Makkah and Madinah before the expiry of the deadline on Saturday night.

These measures follow the Saudi government’s decision on Thursday to expand travel ban to 39 countries. Indonesia, the most populous Muslim country, which is sending the largest contingent of pilgrims, was also included in the list of the countries with a travel ban.

“Even though the name of Indonesia was not mentioned in the list of 39 countries announced by the Ministry of Interior on Thursday, the Indonesian Consulate General had received a circular from the Saudi General Authority of Civil Aviation (GACA) on the same day in which there was a mention that Indonesia is also included in the list.

“We are still trying to find out the exact reason for including us in the list and failed to get in touch with GACA to get a specific answer for this,” said Indonesian Consul General Eko Hartono.

Hartono told Saudi Gazette that a small number of Indonesian pilgrims are remaining in the Kingdom and they will leave on board the flights on March 14 and 15.

Out of a total 45,000 Indonesian pilgrims, only less than 1,000 were yet to return as of last Wednesday. He urged the pilgrims to contact helpline number of the Consulate General (00966 50360 9667) for facilitating their return before the deadline.

Speaking to Saudi Gazette, Indian Consul General Mohammed Noor Rahman Sheikh said that the Consulate General is making intensive efforts to collect the data of the remaining pilgrims and send them back home before March 15, the deadline set by GACA.

“We are in constant contact with the local Saudi authorities, Indian aviation companies and tour operators to send home all the pilgrims by Saturday. The consulate has set up a 24*7 helpline (No. 00966 554403023) for extending assistance regarding the return of pilgrims who have arrived in the holy cities before the Kingdom’s temporary suspension of Umrah pilgrimage,” he said.

Sheikh urged all the remaining Umrah pilgrims to contact their respective Umrah service providers or airlines immediately so as to arrange flights to India by Saturday, taking into account of the instructions from GACA that all flights to India will be suspended from March 15 onwards.

R. Prabu Chandran, manager of Air India, western region of Saudi Arabia, said that the national carrier is fully geared to cope the emergency situation to fly back all the remaining Umrah pilgrims.

“We are operating jumbo aircraft 747-400 with the capacity of 423 passengers instead of Airbus 320 with a capacity of 162 people on Friday and Saturday. The first jumbo will fly to Calicut via Mumbai on Friday and another jumbo to Hyderabad via Calicut on Saturday,” he said while hoping that all the pilgrims will be taken home before the deadline.

“If anymore pilgrims are remaining, we will seek GACA’s special permission to fly them back home,” he added.

India’s Central Board of Secondary Education (CBSE) has postponed the ongoing examinations for class 10 and 12 at all Indian schools across the Kingdom in the wake of the closure of schools and universities in the Kingdom as part of precautionary measures to stem the spread of coronavirus.

The Pakistan Embassy in Riyadh said in a statement that all arrangements are in place to send back its pilgrims before the deadline. “The embassy is closely monitoring the situation and is in constant touch with the relevant Saudi authorities,” the statement said.

Saudi Arabia has slapped temporary travel ban to and from the Asian countries of India, Indonesia, Pakistan, Sri Lanka and the Philippines. Some countries from Africa such as Sudan, Ethiopia, South Sudan, Somalia, Kenya, Djibouti, and Eritrea also come under the ban apart from 27 European Union states and Switzerland.