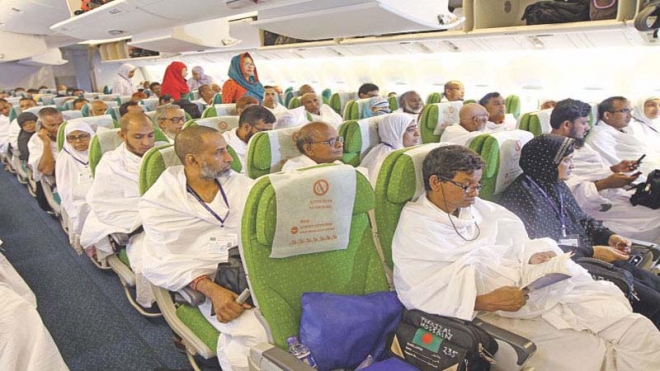 Amid the global scare over the novel coronavirus, Hajj pilgrims are not registering their names for the annual pilgrimage in Saudi Arabia. Given this scenario, the religious affairs ministry has urged the pilgrims to register their names without any fear as they would not be able to perform Hajj otherwise.

Sources said the first Hajj flight is scheduled to leave Dhaka for Jeddah in Saudi Arabia on June 23, but only 1,801 pilgrims, both under government and private arrangements, have registered their names since March 2. The religious affairs ministry has set March 15 as the last date for registration of names of intending pilgrims for this year. However, the government could extend the deadline, sources said.

After suspension of Umrah activities for foreigners to avert the deadly infection, the pilgrims are not showing interest to pay the fees to enrol their names. Against this backdrop, only 1,801 pilgrims out of the total 137,198 quota allocated for Bangladesh had given their papers for registration to perform Hajj till yesterday evening. Among them, 953 persons have deposited their fees for government management and 848 persons have done so for private arrangement.

necessary fees within March 15. “No one knows if this year’s Hajj will be postponed because of the deadly virus. However, hopefully, there will be no problem in performing Hajj this year. If the pilgrimage is not performed, the registered pilgrims will get their money back,” he said.

“The ministry concerned and the Hajj Agencies Association of Bangladesh (HAAB) will ensure that the pilgrims’ money is repaid if the Hajj is postponed. Those intending to withdraw fees will get back their money and others will be allowed to perform Hajj next year on priority basis,” he added.

Expressing hope that the coronavirus will not affect Hajj activities, Abdullah said there was no possibility of financial loss for the pilgrims who have registered. The Saudi authorities will take action to resolve any problem, he added.

“Making arrangements for Hajj is a lengthy process. A lot of time is needed to complete it. This year’s Hajj will be held on July 30 subject to the sighting of the moon. But the authorities have to start the process from March itself to ensure that all procedures are completed on time,” he said.

“If the pilgrims don’t register their names by paying the necessary fees, the process will be delayed,” he added.

The state minister said that those who pay the fees for registration will get chance to perform Hajj this year if the pilgrimage process remains open. Those who would not pay will miss the chance after the Hajj process reopens. “That’s why all intending pilgrims should pay the fees duly,” he explained.

Asked if the ministry has any plan to extend the March 15 deadline, the state minister said that if necessary, the time will be extended. But, all should try to pay the fees quickly, he added.

On his part, HAAB president Shahadat Hossain Taslim said all decisions are taken after discussion with the ministry. “All agency owners, including HAAB, will take the responsibility for the money of Hajj pilgrims. So, the intending pilgrims can register their names by paying fees. If any untoward situation is created due to the coronavirus, their money will be returned,” he added.