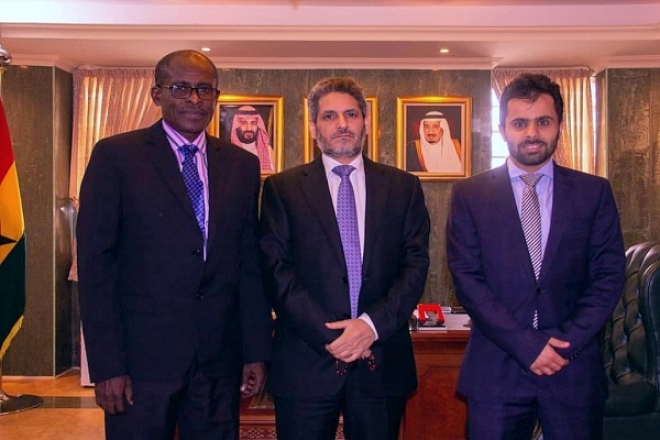 His Excellency, the Ambassador of the Royal Kingdom of Saudi Arabia to Ghana Meshal Hamdan Al-Rogi has confirmed the temporary suspension of Umrah (the lesser hajj) by Saudi authorities as a precautionary measure to protect the holiest mosques of Ka’ba in Makkah and the Prophet’s Mosque in Madina against the spread of the new coronavirus (COVID-19) globally.

The halt in the performance of Umrah also sought to protect Saudi citizens, residents, and pilgrims already in the country.

Ambassador Hamdan Al-Rogi’s intervention was necessitated by the wrong interpretation of the Saudi Ministry of Foreign Affairs press statement of February 26, 2020, by some members of the public to the effect that this year’s Hajj has been postponed or cancelled.

This, he emphasized is neither the case nor the import of it at all. Ambassador Hamdan Al-Rogi explained that the statement that emanated from the Ministry is clear and unambiguous.

It states among other measures that “...the Ministry affirms the keenness of the Kingdom’s government...to implement and approve international standards and support the efforts of countries and international organizations, especially the WHO, to stop the spread of COVID-19 virus, control it and eliminate it”.

The decision is based on the recommendations of the competent health authorities, to apply the highest precautionary standards and take preventive measures to prevent the arrival of the new Coronavirus to the Kingdom and its spread, so the Kingdom’s government has decided to take the following precautions”:

1. Suspending entry to the Kingdom for the purpose of Umrah and visiting the Prophet’s Mosque temporarily.

2. Suspending entry into the Kingdom with tourist visas for those coming countries in the spread of the new Coronavirus (COVID-19) is a danger according to the criteria determined by the competent health authorities in the Kingdom and

3. Temporal suspension of entry of citizens of Gulf Cooperation Council to the cities of Makkah and Madina except for citizens who have been in the Kingdom for 14 consecutive days and did not show signs of Coronavirus infection.

Ambassador Hamdan Al-Rogi is calling on members of the general public and the media to ignore any such misinformation, and or disinformation.

He seized the opportunity to acknowledge and praise the cordial working relationship that exists between the Saudi Embassy and the Ministry of Foreign Affairs and Regional Integration on one hand and the Pilgrims Affairs Office of Ghana (PAOG) on the other.

He commended the Pilgrims Affairs Office of Ghana (PAOG) and the National Hajj Board for their media intervention on this matter as it first broke and the tremendous improvement in the organization of Hajj in Ghana in recent times.

He stressed the readiness of the Saudi Embassy to facilitate the acquisition of hajj visas and other related matters with dispatch.

The Saudi Arabia Ambassador has also promised to liaise and communicate with the relevant Ghanaian authorities any changes in Saudi government policy or directives in so far as this matter of the spread of the coronavirus concerned especially as it relates to trips to Saudi Arabia.