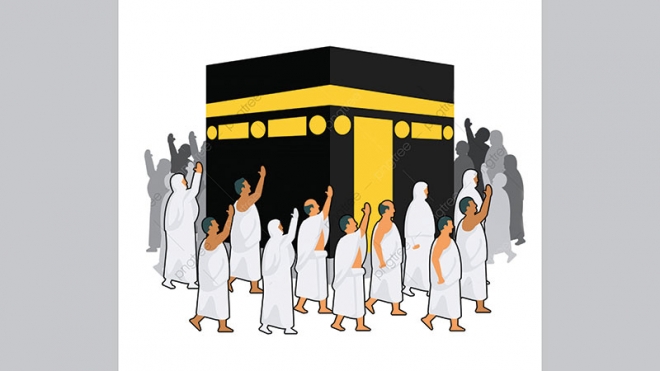 The Saudi Arabian Hajj ministry has asked Bangladesh government to suspend some activities relating to this year’s pilgrimage until further instructions in view of the Covid-19 pandemic. The religious affairs ministry has received the Saudi government’s letter last week, according to sources. The letter suggested intending pilgrims not to rent houses in Saudi Arabia and purchase air tickets to perform Hajj this year in the Kingdom of Saudi Arabia, the sources say. This has fuelled uncertainty over performing holy Hajj in Saudi Arabia this year.

The registration process, however, has still been kept open for the government and private arrangements.

According to an agreement signed with the Saudi government, a total of 137,198 pilgrims will be able to visit Saudi Arabia to perform Hajj this year. Among them, 120,000 can perform Hajj under private management and 17,198 under government management.

Terming the Covid-19 as a global crisis, Nuri said nobody knows how the situation will unfold in the near future.

“But we have to be prepared as there is

enough time for Hajj. In case of any improvement in the global situation during Ramadan, the Saudi government may prepare for Hajj. However, we have suggested that Tk. 151,000 be taken from each intending pilgrim only for registration,” he added.

He said about 60,000 passports have so far been submitted to the ministry concerned for registration purposes.

Private Hajj agencies have been depositing money to banks only for registration purposes, Shahadat Hossain Taslim, president of the Hajj Agencies’ Association of Bangladesh (HAAB), told The Independent yesterday.

“We have suspended all activities, except registration for Hajj. We don’t know yet what will happen tomorrow. The global situation is quite critical now due to the Covid-19 outbreak,” he said.

He also said that HAAB members have been asked not to rent houses in Saudi Arabia and purchase air tickets until further notice.

A total of 788 agencies were given approval for sending Hajj pilgrims to Saudi Arabia this year.