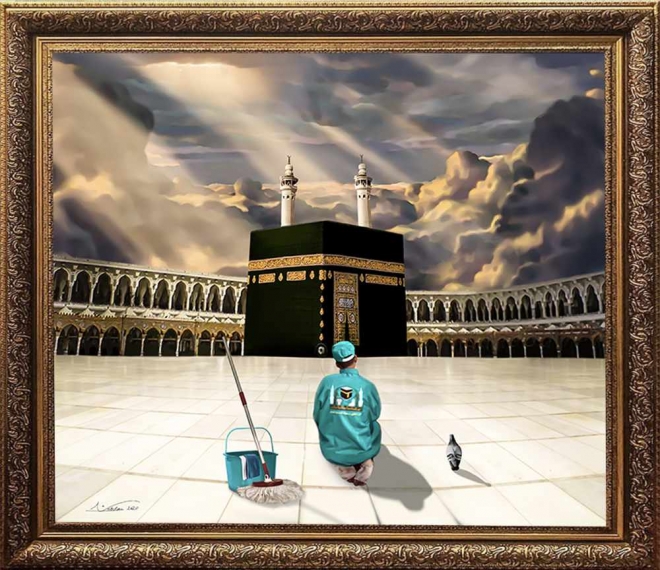 A cleaner kneels in the courtyard of Makkah’s Grand Mosque, the only worshipper in the normally bustling holy site. The moment of emptiness, stillness and contemplation is captured in a painting that has moved Muslims during the global health emergency.

The painting reflects the historic decision taken by Saudi Arabia’s authorities to close the Grand Mosque for prayers to prevent the spread of coronavirus and protect people from infection.

Abuljadayel, who is a Goodwill Ambassador for the King Salman Humanitarian Aid and Relief Center, said the idea for the painting came from reality.

“My inspiration for this piece was based on the unprecedented and unparalleled moment it dawned on me that, for the first time in my life, I would not be able to visit Al-Haram (Grand Mosque),” she told Arab News. “It made me realize what an honor, privilege and blessing it was to be able to do that.”

My inspiration for this piece was based on the unprecedented and unparalleled moment it dawned on me that, for the first time in my life, I would not be able to visit Al-Haram (Grand Mosque). It made me realize what an honor, privilege and blessing it was to be able to do that.

She realized that the only ones who maintained such an elevated status — to visit the Grand Mosque — were those who had dedicated their lives to serve the holy site by tending to it.

“Those same nameless, faceless anonymous workers, whom we tend to take for granted, had the best opportunity in the world,” she added.

The Kingdom suspended all Umrah pilgrimages last month over coronavirus fears, and authorities cleared out the Grand Mosque in preparation for disinfection and sterilization measures.

“These men, who serve Allah night and day, were the ones who now worshipped there alone,” she said.

“This event embodies our faith. It reaffirms the importance of humility. It demonstrates how we are all equal in the sight of God.”

The artist drew inspiration from the UK’s Queen Elizabeth by saying she hoped that people would be able to take pride in how they responded to the challenge, as well as the words of King Salman to talk about the coronavirus crisis and how society was addressing it.

“This crisis will turn into a piece of history that proves man’s defiance in the face of this hardship humankind is experiencing.”

Muslims expressed their appreciation for the painting and the sentiments behind it.

Areej Al-Rowaily (@al_areej_des) tweeted: “The anonymous soldiers are the only ones left. Created by Nabila Abuljadayel.”

Mohammed Al-Qadi (@moealqadi) said that everyone was absent and “those who served this pure house” remained praying in front of the Kaaba, while Fahda Bint Saud (@fahdabntsaud) said she was touched by the artwork and described it as “one of the most beautiful paintings.”


⇐ Previous:
Migrant workers are our guests, their well-being and safety is our responsibility
Next: ⇒
British Muslims warned against Hajj bookings