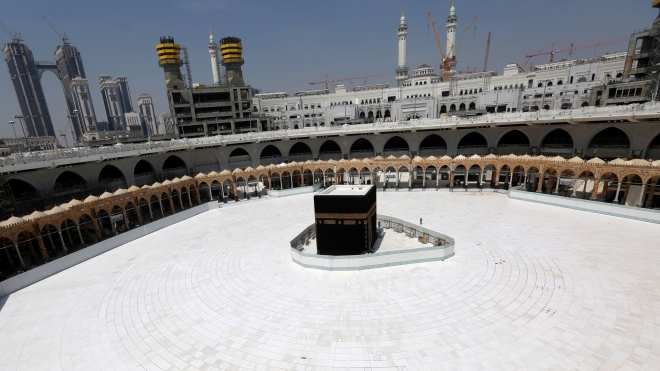 LONDON: British Muslims are being urged to hold off on entering into contracts with Hajj tour operators due to uncertainty over the coronavirus pandemic.

The Council of British Hajjis (CBHUK) issued the advice on Wednesday, in partnership with the British Consulate in Jeddah, City of London Police, Birmingham Trading Standards and the Civil Aviation Authority.

With the Umrah pilgrimage already suspended, concerns are mounting over whether Hajj will take place this year.

Rashid Mogradia, founder and CEO of the CBHUK, encouraged people to “defer making Hajj bookings until there is a clear picture on the spread of the coronavirus.”

He praised Saudi authorities for “taking the health and wellbeing of Muslims from all over the world wanting to undertake the Hajj and Umrah pilgrimage seriously by suspending the lesser pilgrimage of Umrah.”

The British Consul-General in Jeddah, Seif Usher, advised British Muslims to “wait and monitor announcements from the Saudi authorities before planning Hajj and Umrah.”

“The FCO is currently advising British nationals against all non-essential travel worldwide for an indefinite period,” he added.

Yasmin Qureshi, a British MP and chair of the All-Party Parliamentary Group for Hajj and Umrah, urged British Muslims to follow the advice of the Saudi authorities and “put on hold their Hajj plans until there is a clear picture with the coronavirus pandemic.”

Action Fraud, the UK’s national reporting center for fraud and cybercrime, warned that “criminals will use every opportunity they can to defraud innocent people,” and the Hajj and Umrah market “is no different.”

To avoid falling victim to Hajj-related fraud, Action Fraud and the CBHUK encouraged people to make sure that they have booked with an ATOL holder, that it has been issued with an ATOL certificate, and that it is approved by the Saudi Ministry of Hajj and Umrah.

The advice also encouraged people with existing bookings to hold off from making further payment instalments until the Saudi authorities announce Hajj 2020.


⇐ Previous:
Saudi artist draws on Grand Mosque’s closure for painting inspiration
Next: ⇒
How can you visit Makkah during the coronavirus pandemic? Through your computer screen ...