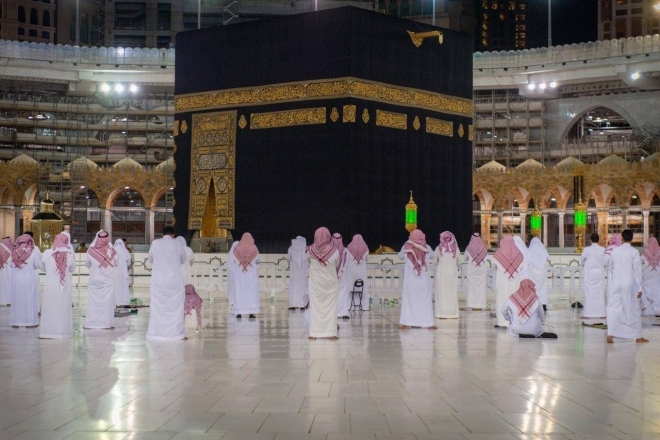 MAKKAH — Worshipers in the Grand Mosque have been maintaining social distancing during Taraweeh prayers to prevent the spread of coronavirus.

Pictures and videos showed the Grand Mosque in Makkah largely empty of worshipers on the first two days of the holy month of Ramadan as authorities closed the holy site as part of measures to combat the spread of the coronavirus.

Prayers from inside the Grand Mosque during Ramadan were restricted to clerics, security staff and cleaners.

Earlier on Thursday, the General Presidency for the Affairs of the Two Holy Mosques removed the protective barricades placed around Holy Kaaba as part of the precautionary measures to prevent the spread of coronavirus.

Over 3,500 workers are currently working around-the-clock to sterilize the Grand Mosque and its outer yards during the month of Ramadan.

Custodian of the Two Holy Mosques King Salman has approved a reduced version of Taraweeh prayers performed at the Grand Mosque in Makkah and Prophet’s Mosque in Madinah while still suspending the public from praying within the grounds during Ramadan.