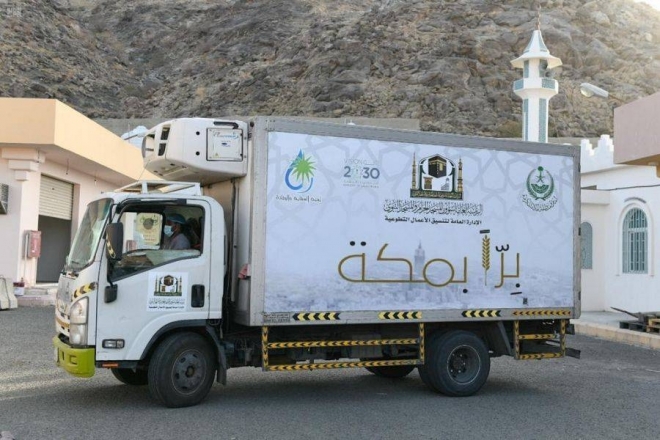 “Where there's a will, there's a way," the old adage certainly holds true for Saudi citizens in Makkah and Madinah who used to host iftar meals for hundreds of thousands of pilgrims and visitors from all corners of the world gathered inside the Grand Mosque and the Prophet’s Mosque as well as in their courtyards.

This year with the suspension of Umrah for both domestic and foreign pilgrims and the prayer restrictions inside the Two Holy Mosques due to the outbreak of coronavirus pandemic, the General Presidency for the Affairs of the Two Holy Mosques has embarked on a unique iftar initiative.

Sheikh Abdul Rahman Al-Sudais, head of the General Presidency for the Affairs of the Two Holy Mosques, has issued an order to launch the initiative in cooperation and coordination with the emirates of Makkah and Madinah.

The authorities have worked out on a massive plan for the distribution of iftar meal baskets among the most deserving people in Makkah and Madinah, roping in the local citizens who want to continue with their good deeds this year too in absence of the usual gatherings inside as well as courtyards.

The distribution of iftar meal baskets in Makkah is being carried out in cooperation with “Birran Makkah Campaign,” an affiliate of the Makkah emirate and “Khair Madinah Campaign,” which is affiliated with the Madinah emirate. This mechanism is aimed at unifying the efforts for the distribution of iftar meals and accomplishing the humanitarian mission in the best possible manner.

It is noteworthy that the Presidency had launched several social and humanitarian initiatives in the past as part of its mission to fulfill the aspirations of the Saudi government to ensure the safety and comfort of citizens and expatriates in the Kingdom.