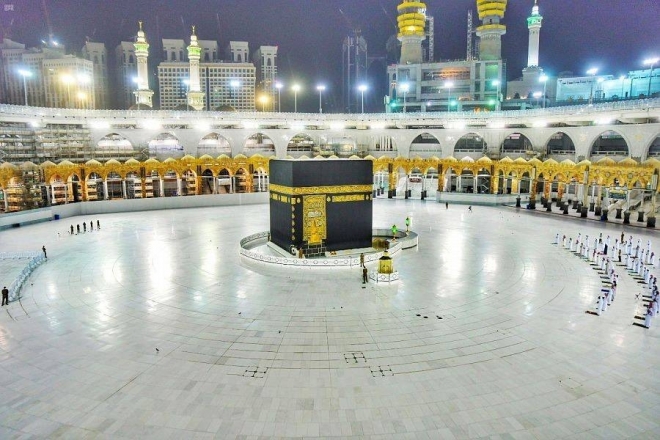 The Grand Mosque in Makkah and the Prophet’s Mosque in Madinah and their sprawling courtyards as well as the central haram areas wore a deserted look on Tuesday which otherwise used to be overcrowded with millions of the faithful on the 27th night of Ramadan.

Only a limited number of worshipers, including officials of the General Presidency for the Affairs of the Two Holy Mosques, and cleaning workers attended the Isha and special night prayers of Taraweeh and Qiyamullail at the Two Holy Mosques. They engaged in supplication and earnest prayers, beseeching Almighty Allah to help the faithful in overcoming the current crisis caused by the outbreak of the coronavirus pandemic.

At the Grand Mosque, Sheikh Abdul Rahman Al-Sudais, head of the presidency and imam of the Grand Mosque, led the prayers. In supplication, often broken by cries, Al-Sudais prayed earnestly to Almighty Allah to save the entire humanity from the tribulation in the form of the pandemic.

It was quite an unprecedented scene, perhaps for the first time in the modern history of the Grand Mosque where hundreds of thousands of Umrah pilgrims and visitors used to throng with rows of people overflowing into its courtyards and surrounding areas during the holy month, especially during the last ten days of Ramadan and 27th night.

The deserted scene was the result of the 24-hour lockdown enforced in the holy city as part of the extraordinary precautionary and preventive measures taken by the Saudi authorities to protect the citizens, expatriates, and pilgrims from the coronavirus pandemic

As the holy city continues to remain in 24-hour curfew situation, it was painful for the believers to spend their time in prayers and supplication at their homes during the night, which is widely believed to be Laylatul Qadr, the Night of Power.

The Holy Qur’an was revealed to the Prophet (peace be up on him) on the Night of Power, which is better than a thousand months. In previous years, over two million worshipers had thronged the Grand Mosque in Makkah and the Prophet’s Mosque in Madinah to attend Isha and special night prayers of Taraweeh and Qiyamullail on the 27th night of Ramadan.

The faithful used to perform Umrah and engage in supplications, seeking the infinite blessings and forgiveness from Almighty Allah. All the floors of the Grand Mosque and its courtyards used to be filled with worshipers, and the rows of worshipers spilled over to the streets of the Central Haram Area.

Meanwhile, the presidency has intensified its efforts to cleanse and sterilize the Two Holy Mosques at a rate of seven times on a daily basis. The workers are engaged in carrying out sterilization of all floors, corridors and courtyards and surrounding areas, using environment friendly sterilization and cleaning materials. The presidency is distributing masks and gloves for the cleaning workers and using thermal cameras for early detection of coronavirus.

The presidency is showing utmost keenness in ensuring the maximum safety of Islam’s holiest shrine with taking all the precautionary and preventive measures. It has set up advanced self-sterilization gates at the entrances to the Grand Mosque. These gates are equipped with the latest technologies and are installed as part of the precautionary measures.

These advanced gates are used for sterilizing people with sanitizer spray and are equipped with thermal cameras to test temperatures from six meters and a smart screen for speed-reading of temperatures of several people at the same time.

These advanced gates have been set up as part of the preventive and precautionary measures undertaken by the presidency to combat coronavirus. The presidency is also keen on enforcing sufficient distance between the rows and in between the worshipers while performing prayers.


⇐ Previous:
Renovation of 'Qibli Wall’ in Prophet’s Mosque completed
Next: ⇒
Al-Aqsa to remain closed until after Eid Al-Fitr