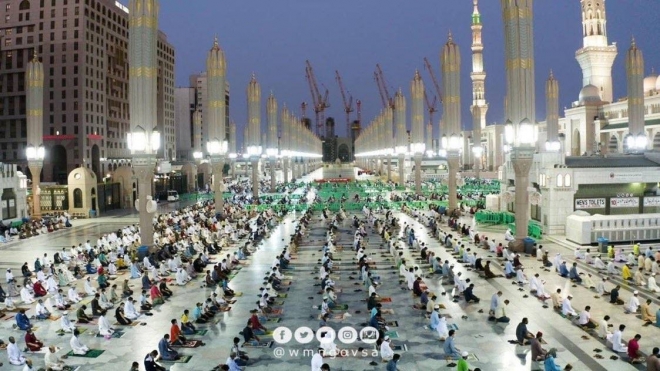 MADINAH — A total of 93,774 worshipers are estimated to have performed obligatory prayers at the Prophet’s Mosque in Madinah on the first day after the mosque’s reopening on Sunday.

The largest number of worshipers, 40,356, came out to perform the Maghrib prayer, according to statistical figures compiled by the Agency for the Prophet’s Mosque under the General Presidency for the Affairs of the Two Holy Mosques.

The mosque opens 11 doors to receive worshipers one hour before the Fajr prayer and closes after Isha prayer. The entry is strictly in compliance with all the precautionary measures and preventive protocol taken by the presidency, as well as by the health and security authorities to protect worshipers from coronavirus pandemic, the Saudi Press Agency reported.

The holy mosque was reopened after Custodian of the Two Holy Mosques King Salman issued on Friday an order to lift the temporary suspension of Friday prayers and congregational prayers for the public that had been in force since March 20.

The Presidency has approved the agency’s plan to reopen the mosque in a phased manner after beefing up precautionary and preventive measures to ensure the safety and protection of worshipers and visitors from the pandemic.

However, the suspension of entry into Rawdah Sharif and the old mosque area continues to remain in force and entry of the faithful to the mosque’s expansion and courtyards will be managed, limiting the congregation to the maximum 40 percent of the mosque’s capacity at a time.

The order for the temporary ban for delivering religious classes, holding Qur’an memorization circles, and spreading iftar supra and distribution of food would continue to remain in force within the mosque and its courtyards. Prayer rugs spread in the mosque’s extension and courtyards are removed, with facilitating the faithful to offer prayers on the marble floor.

The agency’s plan also included placing thermal detection cameras on 11 doors designated for the entry and these include seven for men and four for women. Children are barred from entering the mosque. It stressed the need for worshipers to adhere to precautionary measures and to wear face masks while coming to the mosque, and to maintain the specified distance between worshipers in each row and in between rows.