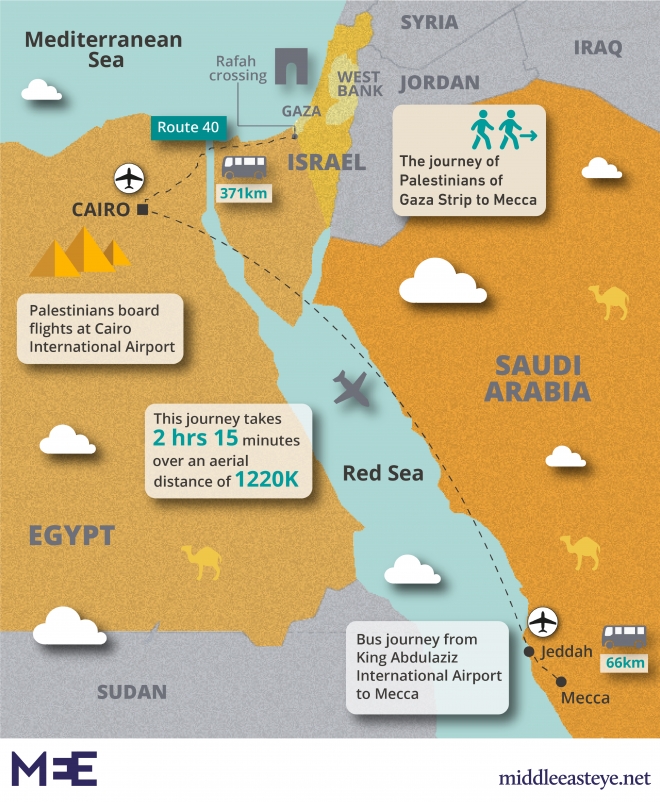 Trapped under an Israeli siege and suffering under impoverished conditions, the severe restriction of Hajj this year has come as a particularly hard blow to hundreds of Palestinians in the Gaza Strip who had been chosen to perform the pilgrimage.

Around 1,5oo Palestinians in Gaza were set to travel to the holy city of Mecca in July, but their plans were officially scrapped this week when Saudi Arabia announced only 1,000 local residents would be allowed to make the pilgrimage under strict conditions.

Around two million Muslims visit Mecca to perform the annual Hajj, and about seven million people head to the holy city every year for the lesser Umrah pilgrimage.

Saudi Arabia distributes Hajj visas to countries corresponding to the size of their Muslim population. Around 5,000 Palestinians from occupied East Jerusalem, the West Bank and the Gaza Strip are allowed entry every year.

The Palestinian Authority-run Awqaf ministry had not yet released the names of those in the West Bank and East Jerusalem allowed to travel. However, Gaza's rival Hamas-run ministry in February drew up a list of 1,568 people in the enclave handed Hajj visas.

'At least war did not happen. We feel disappointment, but this is something not in our hands'

Adeed al-Naji, 69, and his wife were among them.

Speaking to Middle East Eye over a video call from Gaza City, Naji said though he had visited Mecca several times for Umrah, Hajj was an exceptional occasion that he was eagerly anticipating.

All able-bodied Muslims are expected to perform Hajj once in their lifetime.

“Our relatives and our neighbours knew that we were going to Hajj, and some of them came to talk to us and see if we needed anything,” Naji said.

Palestinians in the enclave have been living for more than a decade under a land, sea and air blockade imposed by Israel and Egypt since 2007, which has restricted an estimated two million people from freely travelling abroad to study, worship, visit relatives or seek medical treatment.

In 2019, hundreds of Palestinian Muslims from the Gaza Strip were allowed to travel and perform Umrah for the first time in five years.

Naji said that he and his wife had already paid 3,000 Jordanian dinars ($4,200) each to cover the Hajj visas and costs, including for transport, hotels, travel insurance and meals. The average wage for public sector workers in Gaza is between $200 to $350 a month.

“It’s very expensive for us, and some people save money for years,” Naji said.

Both husband and wife have been on the Hajj waiting list for seven years. Despite the disappointment, Naji, who was born in the Gaza Strip to a family who fled in 1948 from Jaffa's al-Manshieh neighbourhood, said that he understands that “it's an act of God".

"At least war did not happen. We feel disappointment, but this is something not in our hands,” he said.

Since coronavirus hit Saudi Arabia in March, the kingdom has suspended the Umrah, temporarily closed Mecca's Grand Mosque, and forbade worshippers from touching the sacred Kabaa - among other strict measures. However, authorities are now largely reopening the country.

Even with Hajj visas, Palestinians' journey from Gaza to Mecca is a long, exhausting and potentially dangerous one, taking an estimated 48 hours and covering a total of 1,650km.

The most dangerous and risky part of the journey is the 371km stretch along the al-Arish and al-Qantara roads in the north of the embattled Sinai Peninsula, where Islamic State group-linked militants are waging a bloody insurgency in a conflict that Egyptian soldiers have described as "their Vietnam".

Mohammed al-Zayegh, a Gaza resident in his 40s, was also planning to perform Hajj with his mother.

He also registered seven years ago, and he was expecting to see his name in 2017, but the Awqaf ministry kept deferring it.

“We knew for sure that our names would appear in 2020, after all the deferring, and we were looking forward to that. We paid the 3,000 Jordanian dinars to Awqaf and prepared ourselves, but then coronavirus disrupted the world,” Zayegh told MEE.

“Every Muslim wishes to perform Hajj. The feeling that you’ll perform Hajj is great. But we are expecting to go next year.”

Saudi Arabia has recorded 1,428 deaths due to coronavirus, and 118,000 confirmed cases. Palestinian health authorities in the Gaza Strip, meanwhile, have recorded only three deaths and 1,382 cases of infection.

Saudi Arabia's decision to bar the vast majority of Muslims from performing Hajj is the first time it has done so since the kingdom's founding in 1932. However, Hajj has been cancelled or limited on many occasions due to plagues, wars or revolts.