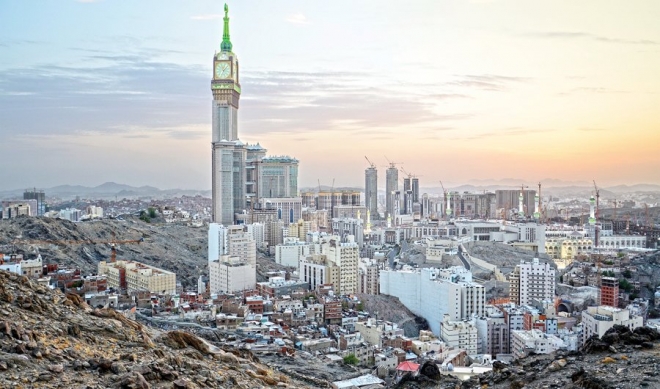 MAKKAH: Makkah’s historical mountains are a window into the holy city’s beauty and grandeur as they overlook all aspects of the Grand Mosque, while also providing perfect locations for guides, photographers and researchers to document, present or learn more about Makkah’s stories from Prophet Muhammad’s era to the present day.

Saudi photojournalist Abdulmohsen Doman told Arab News that the media and international agencies use the mountains’ vantage points to get the best shots of Makkah, especially during the Hajj season, when millions of Muslims from around the world visit the holy city to perform the annual pilgrimage.

Mahdi Nafaa Al-Qurashi, who is a Saudi historical researcher and tour guide, said that Makkah is located in the Arabian Shield geological formation.

“It is one of the oldest formations in the region and is formed from granite rocks interspersed with reefs and valleys, the most important of which is Ibrahim Al-Khalil Valley,” he told Arab News.

Al-Qurashi said that the foundations of the Grand Mosque were built from these mountains, especially Kaaba Mountain.

These mountains told stories from historical times and were associated with many events, in addition to their association with the Prophet’s history, he explained.

He said that the Prophet announced his prophethood from the tops of Al-Safa Hill and Mounts Abu Qubays and Quaiqian, which together were referred to as Al-Akhshabayn.

The Prophet worshipped God in the cave of Hira in Jabal Al-Nour (Mountain of Light) and stayed in Thawr Mountain for three days. Khadija bint Khuwaylid was buried at the bottom of the Mount of Mercy (Jabal Al-Rahma).

All these mountains had great historical stories and connotations, added Al-Qurashi.

Mansour Al-Dajani, who is a researcher on the history of Makkah, said that one of the most famous mountains in Makkah was Abu Qubays, which was one of the Al-Akhshabayn and is referred to in the Hadith.

“It is located east of the Grand Mosque and is said to have been the first mountain laid on earth,” he told Arab News.

“It overlooks the Kaaba and was known as Al-Amin in the Jahiliyyah (the pre-Islamic period also known as the age of ignorance) because the black corner (the black stone in the Kaaba) was stored in it in the Year of the Flood.”

Another famous mountain was Mount Quaiqian, which is also one of the Al-Akhshabayn. It was known as Jabal Hindi.

It is located west of the Grand Mosque and was called Quaiqian due to the clattering sound of weapons. Jabal Khendama is also one of Makkah’s most famous mountains and is located behind Mount Abu Qubays.

Al-Dajani said that other important mountains in Makkah included Jabal Al-Nour, which is located in the northeast at the top of Makkah, to the left of the one leading to Mina.

This is the mountain where the Prophet first received the revelation.

Thawr Mountain, located in the south, is about 3 km from the Grand Mosque.

“The Prophet and (his companion) Abu Bakr Al-Siddiq hid in this mountain when they migrated to Madinah,” he added.

Jabal Omar was also a famous mountain, he said. It was located west of the Grand Mosque and extended from Al-Shabika to Al-Mesfala, both famous areas in Makkah.

There was also Mount Thubair in the east, opposite Jabal Al-Nour.

It is where the animal that Abraham sacrificed instead of his son Ismail is said to have landed.

“There have been changes in our time to make things easier for Muslims, and this includes the expansion of the Grand Mosque,” Al-Dajani said.

“Mount Quaiqian was removed for the sake of the Al-Shamiya Expansion Project, the third Saudi expansion. In addition, Jabal Omar was replaced by the Jabal Omar project. Abu Qubays now houses royal palaces, and tunnels were established through Jabal Khendama to clear traffic jams, and a health, residential and hotel project will be established on it.”

A cultural center will be set up at the bottom of Jabal Al-Nour so that visitors can access information about Makkah and Hira cave.

The site will also be prepared for the mountain to be restored as a natural landmark due to its historical significance.