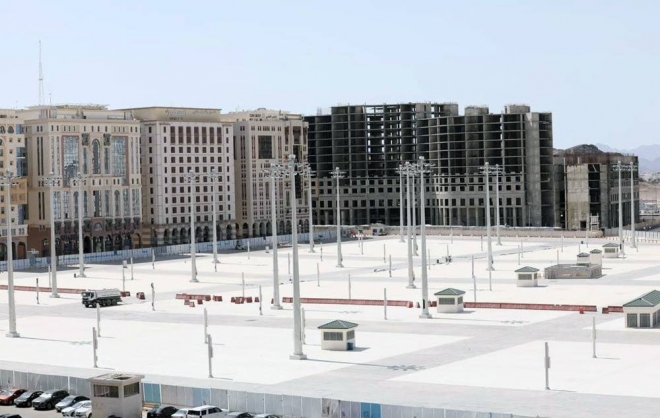 MAKKAH/MADINAH — The holy sites are gearing up to receive the Guests of God for the annual pilgrimage of Hajj, which is 20 days away. On a tour of the holy sites, Okaz/Saudi Gazette saw that all the concerned agencies are finalizing their arrangements to receive pilgrims in Mina, Arafat and Muzdalifah.

Saudi Arabia has decided to allow only a limited number of 10,000 domestic pilgrims to perform Hajj this year in the wake of the outbreak of the coronavirus pandemic. Around 2.5 million foreign and domestic pilgrims had performed Hajj last year.

Out of the total 10,000 pilgrims, 70 percent will be foreigners residing in the Kingdom while the remaining 30 percent are Saudis.

The Ministry of Hajj and Umrah opened last Monday registration for those expatriates who wish to perform Hajj this year through its website. The deadline for registration is on Friday, July 10. Sound health will be the main determinant for allowing performance of Hajj this year.

The maintenance and repair works of roads and streets as well as tents have been completed at the holy sites.

The concerned government and Hajj service agencies are seen finishing their arrangements for the pilgrims. Finishing touches are being made on the pedestrian passages to Jamarat and entry and exit points of the tent city.

Preparations are under way to set up pilgrims’ grouping areas and check points at various entry points to the holy city of Makkah. Entry to the holy city and the holy sites will be restricted only for those who have Hajj permit effective from July 19 (Dhul Qada 28).

At the entry points, veterinary teams have been tasked to ensure the safety and sound health of livestock being transported to the holy city as part of preparations for an epidemic free Hajj.

Meanwhile, the Ministry of Finance has completed a major portion of the works of the western courtyards of the Prophet’s Mosque in Madinah and is expected to hand over shortly to the concerned authorities prior to the start of the Hajj pilgrimage.

According to the information obtained by Okaz/Saudi Gazette, more than 90 of the project covering on an area of about 95,000 square meters with full lighting works has already been completed.

At present, work is under way to link sound and electronic systems between the Prophet’s Mosque and the courtyard, which has the capacity to accommodate more than 80,000 worshipers.


⇐ Previous:
Requests from 160 nationalities have been screened to select Hajj pilgrims
Next: ⇒
How the journey to a Covid-19 vaccine began on the Hajj