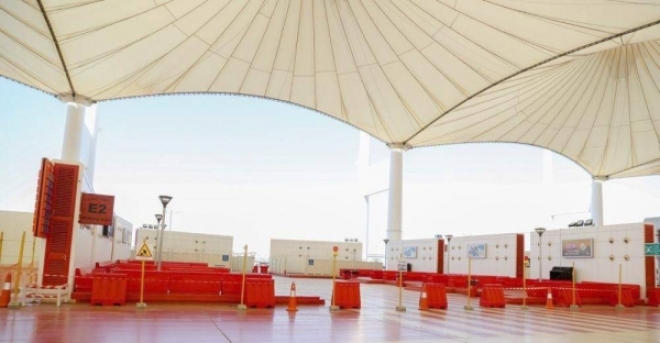 JEDDAH — An exceptional calm pervades the Hajj terminal of King Abdulaziz International Airport as it is not witnessing the roar of overhead planes for the first time during a Hajj season in the last 40 years.

The Hajj terminal, spread over a whopping area of 510,000 square meters, is the world’s fourth-largest terminal. Until the last Hajj season, the terminal received more than 1,500 scheduled flights carrying more than 1.8 million pilgrims, coming to holy cities of Makkah and Madinah from all over the world during the Hajj season.

This north terminal is equipped with high-tech facilities for receiving pilgrims as well as for completing immigration and screening procedures.

The construction of the first phase of the Hajj terminal was completed in 1981 and it became fully operational in 1982. The pilgrims’ lounge area is spread over an area of 400,000 square meters, and it accommodates nearly 3,800 arriving pilgrims and 3,500 departing pilgrims in an hour.

The terminal complex has a total area of 90,000 square meters, and the outer plaza area under tents has an area of 140,000 square meters and serves about one million Hajj pilgrims and about 9 million Umrah pilgrims annually. The complex includes 18 travel lounges, and 10 aerobridges, including the aerobridge for the Airbus 380 A heavy aircraft.

In August 2015, the pilgrims' lounge had undergone massive development, which contributed to raising the efficiency of its operation, increasing the capacity and upgrading the general level of services with the duration of travel procedures reducing to a record time of 45 minutes.