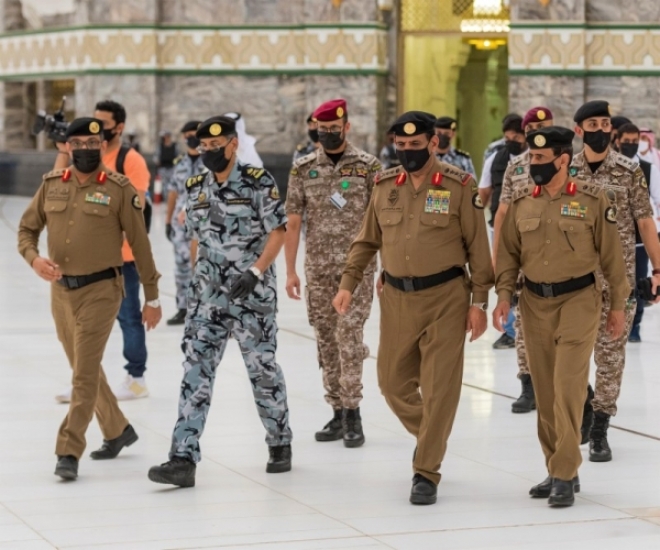 MINA — Gen. Khalid Al-Harbi, director of Public Security and head of the Hajj Security Committee, said that the security forces participating in the Hajj operation are well prepared and geared up to ensure a smooth and hassle-free pilgrimage.

“The security forces have swung into operation to serve the pilgrims and monitor round the clock the entry points to Makkah and the holy sites ever since from July 6 (Dhul Qada 15) and that is line with the directives of Minister of Interior Prince Abdulaziz Bin Saud Bin Naif,” he said in remarks during an inspection tour of the security forces deployed at the Grand Mosque and its premises in Makkah and a number of security points at the holy sites, the Saudi Press Agency reported.

Gen. Al-Harbi emphasized that no one would be allowed to enter the holy sites without a Hajj permit, saying that this is part of the measures to ensure the safety of Hajj pilgrims. He said that the security authorities did not find out any illegal Hajj groups who tried to infiltrate into the holy sites, thanks to the tight security cordon imposed around the holy sites. “This is an unprecedented pilgrimage in all its phases to keep the pilgrims healthy from this epidemic and ensure the safety of all those, including the personnel of military, civil, and service sectors, who are involved in serving the guests of God,” he said.

Gen. Al-Harbi said that the Kingdom is completely prepared and has sufficient experience to manage any situation. “The Kingdom does not have any security concern with regard to weather fluctuations, and the only danger we are facing this year is the pandemic risk and we are ensuring the safety of pilgrims so that they perform their rituals in ease and comfort.”

The Public Security chief noted that the Kingdom is one of the leading countries with the vast knowledge in crowd control and achieving safety of pilgrims during the largest ever annual human gathering where all pilgrims meet on certain spots at a specific period of time and days so as to complete their rituals on time.

Gen. Al-Harbi said that the security agencies detected 14 cases of violations committed by various nationals and punitive measures were taken against them. He praised the cooperation extended by the people of Makkah and their positive stances and response toward the instructions issued by the security authorities.


⇐ Previous:
Prayer rugs to be distributed to Hajj pilgrims
Next: ⇒
One health leader assigned for every 50 pilgrims for this year’s Hajj