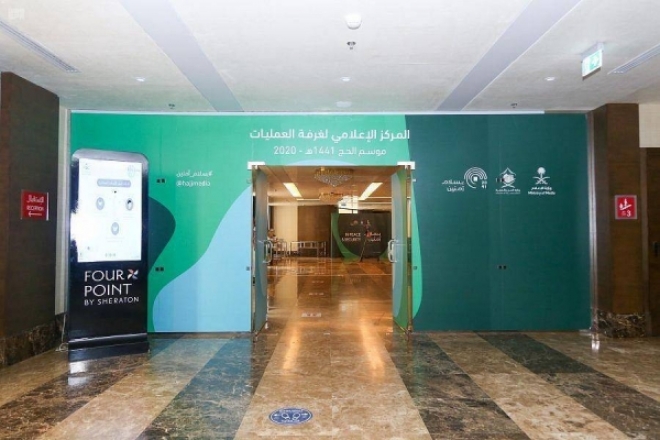 Saudi Arabia’s Ministry of Media launched the media center for the operation room of this year’s Hajj, the Saudi Press Agency reported on Wednesday.

The facility is supervised by the ministry and its organs, namely the Saudi Press Agency (SPA), Saudi Broadcasting Authority (SBA), and the General Authority for Audiovisual Media, with the aim of unifying and coordinating media efforts among government agencies, and creating media content that monitors the Kingdom's efforts to serve pilgrims in international living languages.

Broadcasting Authority (SBA) daily hosts its speakers via video call or mobile phones to talk about the preparations and cover Hajj rituals through its various programs and news releases.

On the other hand, the General Authority for Audiovisual supervises the organization of work during the Hajj season with several organizational measures to ensure the progress of the media activity of local and international institutions, bodies and channels that cover the Hajj season in accordance with media policies of the Kingdom.

Each year, the Saudi Press Agency (SPA) is keen on covering the Hajj journey and transmitting it to all parts of the world with all its details including news, developments, reports, and polls, supported by photos, videos, and infographics, as part of its multi-media efforts to convey the pilgrim’s journey to the entire world.

SPA formed an integrated media team to work in Makkah and the holy places to follow the event in an up-to-date manner to document this great journey of Hajj.