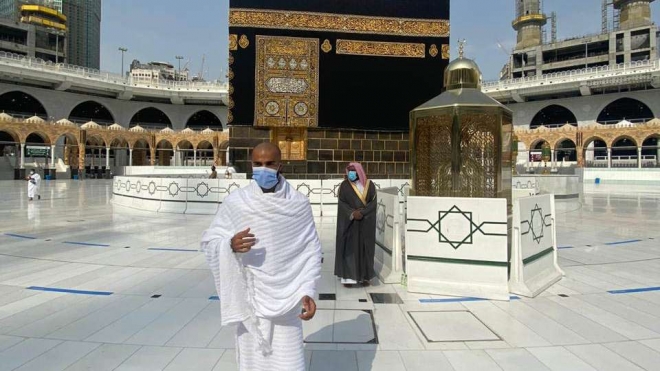 From the first weeks coronavirus struck in Saudi Arabia to now, Dr Hamza Alherz has worked tirelessly at a government hospital in Riyadh to treat patients. The giving trait must run in his blood – he is one of eight siblings, all doctors, who answered the call to care for the kingdom’s sick amid the pandemic.

Dr Alherz, 30, and his siblings all contracted the virus in the course of their work, but only he was bestowed the honour of performing Hajj as a thank you for his service.

“This was my first time performing Hajj, it was just an amazing feeling,” he told The National via a Zoom call on his last day at the holy sites in Mina.

Fewer than 10,000 people were given permission to perform the Hajj pilgrimage this year, many of whom had been and still are serving on the front lines of the crisis, which has seen 278,000 coronavirus cases in the kingdom alone.

This year’s Islamic ritual was limited to those who were already in Saudi Arabia, 70 per cent of whom are residents from 160 nationalities, and the remaining 30 per cent Saudis. Many of Dr Alherz’s colleagues on the pilgrimage had recovered after contracting the virus in the course of their work.

Dr Alherz said that the call that informed him that he had been selected to perform this year’s extraordinary Hajj was the “best news I had this year”.

He said the last year up to the Hajj journey reminded him of a verse in the Quran.

“God Almighty said: ‘you may hate a thing although it is good for you’ and I felt this verse in my situation and what happened to me,” Dr Alherz said.

“Before I contracted the virus, all of us in the health sector were afraid of this happening. Then it happened to me, “ he said. “When I got the news that I’m going for Hajj, I felt that the meaning of this holy verse truly applies to me.”

Dr Alherz explained that the most touching moment of his journey was during Arafat Day, the second day of Hajj, when pilgrims visit Mount Arafat, where the Prophet Mohammed gave his farewell sermon.

“I saw lots of footage before of Mount Arafat during Hajj, I saw how crowds of people had climbed it every year, it looked as if the mountain doesn’t exist, just pilgrims covering it.”

But due to the limited numbers of pilgrims this year, the scene was different, he said.

“We were able to go to the top of the mountain smoothly and pray at ease, it was an indescribable view.”

Emotions were running high for many of the pilgrims, including nurse Manal Barnawi, who found the experience of visiting the holy mosque in Makkah like returning home.

Ms Barnawi, 38, who has been working in a Covid-19 ward in a hospital in Makkah, said she had visited the holy mosque often throughout her life, but had missed it after it was closed to the public due to the coronavirus crisis.

“When I got off the bus, still in the yards away from the mosque, I burst into tears,” she said. “Then when I saw the Kaaba, I just stood in awe."

She said at that moment she felt extreme gratitude to God, amazed that “Allah had chosen me from about two billion Muslims to be among the very few selected people to visit the holy mosque and perform Hajj this year”.

Ms Barnawi and three colleagues were diagnosed with coronavirus on May 20.

“My symptoms were minor but I kept testing positive for a whole month,” she said. Eid Al Fitr, the holiday that follows Ramadan, was particularly hard for her.

“I had to spend all of the month of Shawwal alone.”

Now Ms Barnawi said she feels happy that God had granted her another chance to worship him this year.

“When the last nights of Ramadan were approaching, I was getting excited and looking forward to pray extra and commit to the night prayers, but then I got sick. First, I was physically too tired to pray, but then I was depressed so I slacked off my prayers, now I’m making it up at these holy sites in Makkah,” she added.

When the Ministry of Hajj and Umrah called with the good news, she couldn’t believe it.

“A lot of people were happy for me, some even envied me,” she said, laughing.

“But my father was the happiest person for me,” she said, adding that he is the one she is praying the most for because he is sick.

Ms Barnawi had performed Hajj before but she was a child.

She recalled how, as a child, she and her family were never able to enter the Nimrah Mosque in Arafat due to the crowds, but now she was finally able to.

As an adult Ms Barnawi had just one other experience of Hajj. Not as a pilgrim, but as a nurse at Mina Hospital in 2018.

“That Hajj was crowded, busy and all my focus was on pilgrims’ health, but this year I’m just focusing on me and praying for everyone as well.

“It is quiet this year and you really get the chance to pray sincerely”.


⇐ Previous:
Ministry to start Hajj evaluation and preparations for Umrah soon
Next: ⇒
‘Hajj experience was beyond our expectations’