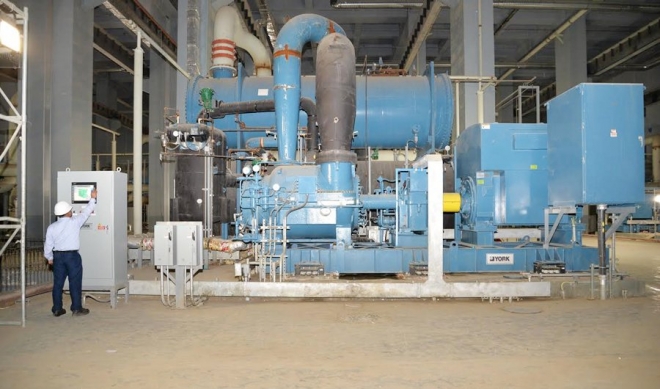 HVAC company Al-Salem Johnson Controls (YORK), which operates the “Ajyad” and “Al-Shamiya” cooling stations located in Makkah’s Grand Mosque, ensured that pilgrims performing the Hajj rituals this year did so in a cool and pleasant atmosphere inside Al-Haram.

“YORK is proud to serve the guests of Allah in Makkah Al-Mukarramah by accompanying the pilgrims in their Hajj rituals and providing a fresh and cool ambience throughout their Hajj journey, especially in Makkah’s Grand Mosque,” the company said.

According to YORK, the total cooling capacity of the two cooling plants is 159,000 tons (equivalent to the cooling required for 15,000 medium-sized apartments). YORK chillers pump the chilled water to more than 1,000 Saudi-made air handling units (AHUs) located inside the Grand Mosque, which then distribute 100 percent fresh and cool air that reaches every corner of Al-Haram. The chillers’ latest technologies and the AHUs’ highly efficient filtration system help to maintain the required temperature and humidity levels necessary for ensuring a comfortable ambience for the pilgrims.

The cooling capacity is regulated by the number of pilgrims and worshippers inside the Grand Mosque. Thus, owing to the reduced number of pilgrims this year, the total cooling capacity was halved to nearly 80,000 tons (equivalent to the cooling of 8,000 medium-sized apartments), provided through 63 YORK chillers located inside the Ajyad and Al-Shamiyah cooling plants.

The company has designed a highly efficient and smart ventilation, air conditioning and refrigeration system for Al-Haram, taking into account the crowded nature of the location as well as the ability of the cooling stations to adapt to the Grand Mosque’s ongoing expansion project.

The Al-Shamiyah plant, which is one of the two world’s largest cooling plants of its kind, contains 24 YORK OM centrifugal chillers. The chillers have been customized and engineered especially to meet the requirements of the Grand Mosque. Its special industrial design helps in long-term operation with high efficiency, while the variable-speed drive (VSD) technology contributes in reducing the annual energy consumption by about 30 percent, in addition to reducing the amount of sound.

These chillers feature “smart control,” which enables the chillers to estimate the rate of congestion inside Al-Haram by calculating the difference between the temperature of the water that is pumped to and from the mosque. Accordingly, the chiller increases or decreases the cooling capacity in proportion to the size of the crowds inside the mosque. The plant offers sustainable cooling solutions as its chillers use a chilled water system with an eco-friendly refrigerant.

In addition to the more than 100 operation and maintenance technicians stationed around the clock inside the Grand Mosque to ensure the efficient operation of the cooling stations and quick handling of any untoward incidents, the company dedicated an additional response team during Hajj to quickly respond to any maintenance requests or emergency situations.