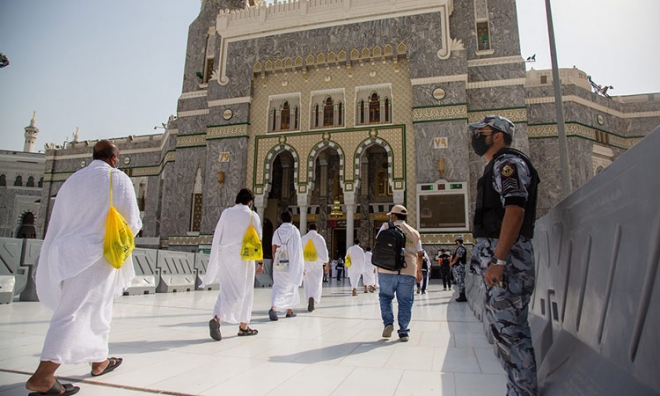 Amidst a global pandemic that continues to grip the world, the Kingdom of Saudi Arabia successfully managed to achieve zero Covid-19 cases following the end of what was a curtailed Hajj 2020, by implementing exceptional health and safety measures under extraordinary circumstances.

For its efforts, Saudi Arabia has been lauded by health authorities and leaders from around the world, for effectively navigating what is typically one of the world’s largest religious gatherings.

Receiving praise from the Muslim World League and Director-General of the World Health Organisation (WHO), Dr Tedros Adhanom Ghebreyesus, who upon congratulating the Kingdom for hosting a safe Hajj called the success “a powerful demonstration of the kinds of measures that countries can and must take to adapt to the new normal.”

Typically, one of the largest religious gatherings in the world, where more than two million worshippers gather in the Holy City of Makkah, the Hajj pilgrimage occurs 70 days after the end of Ramadan in the Islamic Month Dhul-Hijjah.

A picture taken on July 29 shows pilgrims circumambulating around the Kaaba in Makkah. File/AFP

As a result of the coronavirus pandemic, this year, for the first time in modern history millions of Muslims from around the world were unable to descend on the sacred places in the Holy Cities of Makkah and Medina to perform Hajj – the fifth pillar of Islam.

The Kingdom witnessed an unprecedented pilgrimage in 2020, with the curtailment of Hajj meaning that permits were granted to only thousands of pilgrims from inside the Kingdom.

A disappointment for millions of Muslims around the world perhaps, but a measure deemed necessary by the Kingdom’s authorities to ensure global health security and safety.

Worshippers aged between 20 and 65 without chronic illnesses were required to apply online to gain a Hajj permit. Selections were made at random from an electronic dataset, with all chosen pilgrims required to quarantine before Hajj and undergo PCR testing to produce two sets of negative results.

Seventy per cent of those granted access to perform Hajj in 2020 were expatriates with no chronic diseases, residing inside the Kingdom. While the remaining 30 per cent were Saudi national healthcare professionals and military and security personnel who had recovered from Covid-19 and met health prerequisites.

Hajj pilgrims this year were required to undergo health checkups and PCR testing, followed by a 7-day home quarantine. Pilgrims were then transported to Makkah and quarantined for a further three days, followed by a second PCR test. Only then, those who tested negative on both occasions were permitted to commence their Hajj ritual.

Similarly, at the end of Hajj, pilgrims were again required to self-isolate for 14-days, and it is these strict measures that meant zero Covid-19 cases following the end of Hajj 2020.

Another safety measure was the electronic tagging of pilgrims at their homes before they even began their Hajj journey and arrived in the Holy City of Makkah. Each pilgrim was tagged with a bracelet designed to monitor and record their health status and track individual quarantine, through the Tatamman app.

Each pilgrim was tagged with a bracelet designed to monitor and record their health status and track individual quarantine, through the Tatamman app.

Tatamman essentially enhanced the responsibility of those directed into health isolation while closely monitoring their health status. The app also conveniently facilitated various other health related services including the booking of PCR testing appointments.

Additionally, specific Hajj rituals were tweaked to ensure social distancing of at least 1.5 metres between each pilgrim while either praying, circumventing the Kaaba or performing other religious duties.

Congregational prayers, wearing cloth face masks, were permitted, with praying shoulder to shoulder in large crowds replaced by socially distanced devotions. Pilgrims were also only allowed to move in fixed groups of 20 with an assigned health leader.

Playing a pivotal role in the successful monitoring of public health during Hajj, each leader was responsible for conducting health checkups twice a day for their designated group.

As part of enhanced measures to ensure health and safety, touching or kissing of the honourable Kaaba and the Black Stone in the Grand Mosque in Makkah was not permitted.

Site cleaning and disinfection of the Holy City of Makkah was performed at regular intervals, with all service providers and workers required to adhere to protocols stipulated by the Ministry of Health in Saudi Arabia.

A set of detailed protocols outlined by the government, weeks prior to the beginning of Hajj rituals, included guidelines for public awareness signage; disinfection record-keeping of the Holy sites and public facilities; ventilation; waste management; public interactive device usage; hospitality; food and beverage services; transportation and crowd control to, from and inside the Holy sites of the Grand Mosque, Mount Arafaa and Muzdalifah (The Sacred Grove).

As a nation that has successfully managed a similar coronavirus MERS-CoV of a more endemic nature, Saudi Arabia suspended pilgrimages to the two Holy Cities on 26 February 2020 as an early preventive measure for global safety. This was weeks before a single case of Covid-19 had even been reported in the Kingdom or the disease had been categorised as a pandemic by WHO. The impact of these initial travel restrictions aided in managing the spread of the virus not just in Saudi Arabia, but worldwide too.

Together the authorities use analytics while working closely across sectors to engage the relevant national and international organisations and expertise.

These systems included Command and Control Centres that monitor the availability of health services, and utilisation rate over the successive Hajj seasons, to enable real-time decision-making and evidence-based future planning.

The Ministry of Health’s Global Centre for Mass Gathering Medicine (GCMGM), a WHO Collaborative Centre, utilised its tools (Salem Tool for Events, and Jeddah Tool for Mass Gatherings) to assess the health risks of public gatherings. The GCMGM focuses on developing evidence-based public mass gathering management policies and strategies enhanced by scientific research.

Additionally, The Command and Control Centre (CCC) together with the National Heath Emergency Operations Centre (NHEOC), effectively Saudi Arabia’s crisis unit, the Saudi Centre for Disease Prevention and Control (SaudiCDC) and the National Health Command Centre (NHCC), the Ministry of Health has been working for several years to prevent and control communicable and non-communicable diseases and other health threats.

Together the authorities use analytics, best practice and forecasting to inform decision making, while working closely across sectors to engage the relevant national and international organisations and expertise.

As countries emerge from lockdown, and we begin to navigate a “new normal,” the success of Hajj 2020 provides a credible case study to the world of how to safely resume life as we know it, within a transformed landscape.