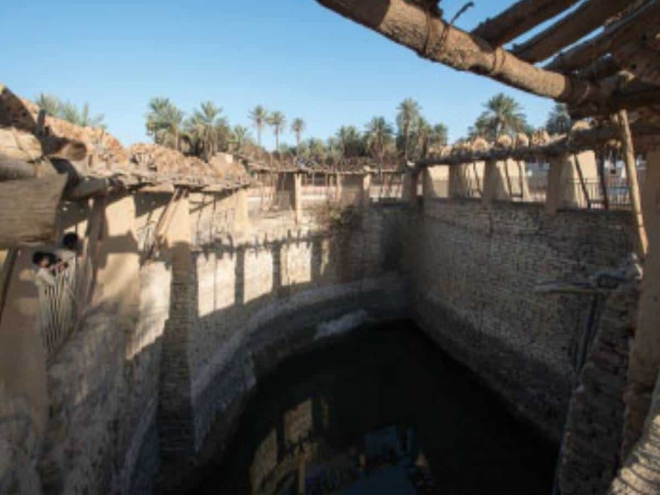 Tayma or Tema is located in the northwestern Saudi Arabia, 400 km north of Madinah and 260 km southeast of Tabuk. Evidences from the excavations of the city of Tayma disclose its rich history from 8th century BC. Hadaj well, near Tayma city center, is considered one of the largest wells in the Arabia Peninsula.

It was dug and constructed in the sixth century B. C. It was said to be buried when the flood disaster hit Tayma and centuries later, was reconstructed. It was restored under the leadership of Muhammad al-Najem and the Saudi Commission for Tourism and Antiquities. This unceasing bounty in an inhospitable land made Tayma famous.

You caravans of Dedanites,

who camp in the thickets of Arabia,

bring water for the thirsty;

you who live Tema,

bring food for the fugitives”

‘Tema’ mentioned in the verse is ‘Tayma’ and Dedanites are people of Dedan (present day Khuraybah near Al Ula). Hadaj Well was said to be very popular in biblical times.

The plain ground is where the camels stand in a line to draw water from the well.

This well and its surroundings served as a thirst quenching ground for myriads of travelers from ancient times till Islamic period. Ancient Tayma was an important oasis and trade station on the spice route.

Bir Hadaj (Hadaj well) has a diameter of 18 meters. Surrounded by palm gardens, the area represents Tayma’s status as an oasis

Mih’ala of Hadaj well (a wooden wheel used in the past to draw water from well).

There are 40 mihala for Hadaj well by which camels draw water which in turn are driven through canals for irrigation and other purposes.

Around a 100 meter from this area is Hadaj Fort which is worth a visit.

The Bir Hadaj, perhaps the oldest well on the Arabian Peninsula, has been in use for thousands of years until today.