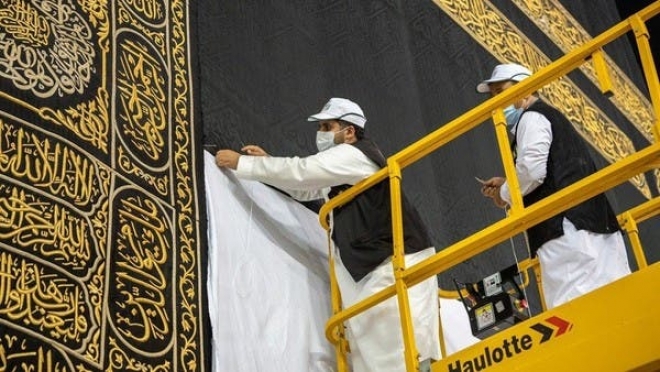 At the end of the Hajj season, the administration of the Masjid al-Haram in Saudi Arabia removed the raised part of the Kaaba’s Kiswa and tied it to the gold hooks of Shazarwan.

It was reported that after the conquest of Makkah in the ninth Hijri year, the Prophet covered the Kaaba in Yemeni clothes as he performed his farewell pilgrimage.

The Kiswa is replaced once a year during Hajj after the pilgrims go to Mount Arafat, in preparation for receiving worshippers the next morning, which coincides with Eid Al-Adha.

Meanwhile, the General Presidency for the Affairs of the Two Holy Mosques has lifted the lower part of the Kiswa by about 3 meters and covered the raised area with white cotton fabric (approximately two meters in width from the four sides).

The move was designed as a precaution to maintain the cleanliness and safety of the Kiswa and prevent tampering with it.

The colors of the Kaaba’s coverings have seen regular changes through the ages.

During the Abbasid era, it was draped once with white and once in red, while the Seljuk Sultan covered it with yellow brocade. The Abbasid Caliph Al-Nassir changed the Kiswa’s color to green and later to black brocade, and this has remained its color to the present day.