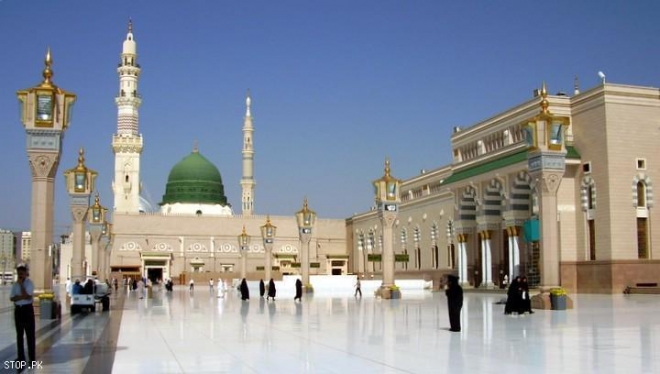 Every year millions of Muslims from across the world visit the Holy Mosque in Madina, popularly known as Masjid-e Nabawi. The visit embodies their love and respect for the messenger of peace, Prophet Muhammad (PBUH). Madina is his city and within the precincts of Masjid-e Nabawi lays his tomb also.

Al Masjid-e Nabawi was the third mosque built in the history of Islam and is now one of the largest mosques in the world. It is the second-holiest site in Islam, after Masjid Al-Haram in Makkah.

The site was originally adjacent to Prophet Muhammad’s house; he settled there after his Hijra (emigration) to Medina in 622 CE. The mosque served as a community centre, a court, and a religious school. Subsequent Islamic rulers greatly expanded and decorated it. In 1909, it became the first place in the Arabian Peninsula to be provided with electrical lights.

After an expansion during the reign of the Umayyad Caliph Abdullah Al Walid I, it now incorporates the final resting place of Prophet Muhammad and the first two Rashidun caliphs Hazrat Abu Bakr and Hazrat Umar (RA). One of the most notable features of the site is the Green Dome in the southeast corner of the mosque, originally Bibi Aisha’s house, where the tomb of Prophet Muhammad is located. In 1279, a wooden cupola was built over the tomb, which was later rebuilt and renovated multiple times in the late fifteenth century and once in 1817. The current dome was added in 1818 by the Ottoman Sultan Mahmud II, and it was first painted green in 1837, hence becoming known as the “Green Dome”, earlier it had been painted white and purple also.

The foundation for Masjid-e Nabawi was laid by the Prophet himself in One Hijri (622 CE). Over the years to accommodate the number of pilgrims to the mosque and Prophet’s Tomb, the mosque and its outer areas have been expanded several times.

While the pilgrims pray in tranquillity and comfort, the authorities responsible for managing the Prophet’s Mosque, the General Presidency for the Affairs of the Two Holy Mosques (in Madina and Makkah) under the guidance of Sheikh Abdurrahman bin Abdul Aziz Al Sudais, strive to provide every comfort for the pilgrims.

During my Umrah recently, I wondered how the authorities manage the complex day-to-day administration and management of the Prophet’s Mosque. This led me to meet with Gameel Al Maseri, Director-Media and Public Relations of the General Presidency.

Al Maseri started with details of the mosque when its foundation stone was laid by the Holy Prophet in One Hijri (c. 622 CE). According to him, the mosque built by the Prophet was only 1050 Sq Mt in area, and the first expansion was undertaken by the Prophet himself after the battle of Khaiber in 7 Hijri. Later different Caliphs and Turkish Sultans carried out five further expansions, under the Saudi royal family after two major expansions the total area of the Masjid including the courtyard is now 2,35,000 sq mt or 59 acres and the masjid is spread over 82,000 sq mt or 20.26 acres.

According to Al Maseri the roof of the mosque is covered by 27 big transparent domes weighing 80 tonnes each, to provide natural light in the mosque, these domes can be opened automatically in one minute and manually in 30 minutes.

According to Al Maseri, to keep the masjid clean and fit for prayers, the Presidency employs approximately 6,000 people. The cleaning staff of the masjid is on their toes twenty-four hours a day, keeping the carpets vacuumed and cleaned, numbering 16,000 each measuring 12×24 ft.; courtyard and pathways gleaming; 1000 water containers containing Zam Zam continuously filled; keeping shoe racks numbering 1500 spick and span; 5000 foldable chairs in working condition for the handicapped pilgrims; and every piece of litter picked instantly by khadims.

An interesting feature of providing Zam Zam water to the pilgrims at the masjid is that every day 20 water tankers, in morning and evening travel from Zam Zam well in Makkah to Madina, and deliver water to the water plan at Al Masaffa, about 7 km away from the mosque. At the plant, every tanker is tested for purity and drinkability of the Zam Zam and from there it is supplied chilled and non-chilled by pipes to the Masjid-e Nabawi, where it is distributed through water coolers and taps. Every water cooler kept in the masjid is sterilised and washed every day, to keep away any contamination. The complex at Al Masaffa also houses the air conditioning and emergency and electricity power supply systems and is connected to the masjid through an underground tunnel with a width of a four-lane road.

Maseri went on to add further that there is a whole world beneath the masjid. This basement area contains administrative offices, offices for security, audio and video recording centre, an audio dissemination and announcement centre, parking for 5,000 cars and a pollution monitoring centre.

To cater to the needs of the pilgrims, three medical centres are operational in different locations of the compound and their number is increased during the Hajj. Keeping up with the times and demands of the busy travellers six paid luggage lockers are situated in three corners of the compound, also new charging stations have been installed throughout the masjid to charge your mobile phones and power banks, new audio systems have also been installed, using which you can ask the Alims about any religious doubts, which you might have and efforts are on to introduce the simultaneous translation of the khutbas and speeches delivered in Arabic into English, Urdu and other languages. Also now 40 electric golf carts are used to ferry luggage (carpets, water cans etc.) and officials from one point to another in the masjid’s compound. In addition to this, the courtyard has 38 ablution stalls at the ground level and 380 toilets at the basement level.

The interior of the masjid is adorned with more than 2,000 chandeliers and 100,000 light bulbs to provide enough lighting in the building. The masjid is equipped with the best sound system in the world, with around 1,000 speakers installed in every nook and corner of the mosque, so that pilgrims can listen to the recitation and khutbas easily. The speakers atop the main minaret of the masjid are so powerful that at the time of Fajr Azaan, the sound of the azaan can be heard up to 10 km away. The cameras installed at the minarets and inside the mosque besides helping in managing the security, also provide live footage for the Sunnah channel, operated by the Presidency.

Since at prayer times the pilgrims spillover from the main mosque into the courtyard, special provisions like umbrellas and mist fans have been provided to save them from heat and rain. About 10 years back the authorities installed 250 automatic umbrellas in the courtyard. Like blooming flowers, umbrellas are programmed to fold and unfold in minutely delayed sequence to avoid collision between their moving parts. Their near-silent operation is automatically aligned with changes in daily temperature. They open each morning, creating a translucent ceiling, and retract each evening in less than three minutes, leaving a forest of 250 elegantly detailed posts towering over expansive public space. There are 436 of the mist fans, blowing 200 litres of water as a fine mist of water into the air every hour. They start spraying mist automatically whenever the temperature rises above 30 degrees Celsius.

The mosque also houses a library originally established in 886 Hijri/1481 CE. The library is located within the western wing of Prophet’s Mosque and serves as a centre for religious and historical books and archive of handwritten manuscripts and other artefacts.

One side of the library, besides Bab Osman, contains rare documents, books and old copies of the Holy Quran. Multimedia section, of the library, is located near the Bab Umar ibn al-Khattab, and it keeps a record of what is delivered in the Prophet’s Mosque such as lessons, speeches and prayers (salah).

Lastly recalling another interesting fact about the Masjid-e Nabawi, Maseri said that preaching and teaching have always been an integral part of the Prophet’s Mosque. According to him, Al-Suffah is a place that was at the rear side of Masjid-e Nabawi during the Madina period. Prophet Muhammad ordered it to be covered by palm leaves in order to provide shade, hence it was called Al-Suffah or Al-Zullah; i.e. the shade. Homeless and unmarried Muhajirun (companions of Muhammad who migrated from Makka) who did not have relatives in Madina, dwelt at Al-Suffah where they were mainly learning the Holy Quran and sunnah. These people were called Ashab al-Suffah, which translates to “Suffah Fraternity”.

The Prophet used to sit and chat with them, besides sharing food, so they were counted as his dependents. Nowadays this raised platform at the rear of the Prophet’s Tomb is known as Suffah’s Platform and usually, there is a race amongst the pilgrims to sit and recite the Holy Quran at the platform. To continue this practice of teaching and learning, there are two madrassas, one each for men and women, which operate from within the Masjid-e Nabawi and currently have 1500 students on the rolls, classes are held from 7 to 11 in the morning and later in the day from Maghrib till Isha prayers. There is no restriction and curious pilgrims could be seen sitting at the group’s periphery to catch some useful information from the Alims teaching there.