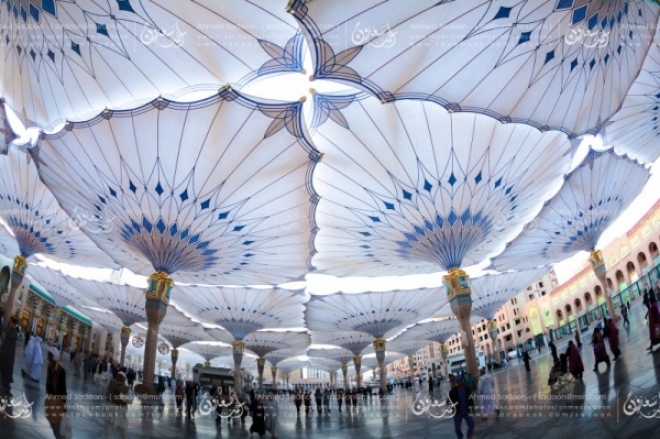 MADINAH — The Prophet's City has always had a great place in the hearts of successive Saudi leaders from late King Abdulaziz Al-Saud to Custodian of the Two Holy Mosques King Salman.

The city also holds significant importance for the Muslims all over the world due to its outstanding religious and historical heritage.

Due to the Islamic, cultural, historical, and social status of the city and its landmarks linked to the life and times of Prophet Muhammad (peace be upon him), Madinah has received care, attention, development, and construction throughout Saudi Arabia's modern history.

The Prophet's Mosque, the second of the Two Holy Mosques, to which millions of Muslims flock throughout the year from around the globe, had the priority in the development, construction, and expansions, according to appropriate architectural designs, a Saudi Press Agency (SPA) report said on Saturday.

The Prophet's Mosque, built by Prophet Muhammad (pbuh) himself in the first year of Hijra, was initially a 30x35 meter edifice, has witnessed about 10 consecutive expansions, the largest of which took place during the era of the Saudi state.

Expansions of the Prophet's Holy Mosque continued in different periods. The Prophet's Mosque has also received care and attention since the unification of the Kingdom of Saudi Arabia by the late founder King Abdulaziz and his succeeding sons who launched several projects, expanded the mosque's area, and provided various necessary services to serve the mosque and its worshipers and visitors.

During the late King Abdulaziz's reign, several repairs were made to the Prophet’s Mosque. In 1365 Hijri, pillars, and walls of the mosque's north side started cracking. On the orders of late King Abdulaziz, renovation and expansion work at the mosque were initiated simultaneously.

In 1370 AH, the demolition of the buildings adjacent to the Prophet’s Mosque began. In 1375 AH, construction works and expansion during the reign of King Saud Bin Abdulaziz were completed, as the construction was done using reinforced concrete, resulting in adding 6,033 sq. meters to the mosque's area.

During the reign of King Faisal Bin Abdulaziz and with the increasing number of people coming to the Prophet’s Mosque, especially during the Hajj season, expanding the mosque area became necessary. Accordingly, on King Faisal's order, the expansion was done on the western side of the mosque and 35,000 sq. meters were added to the area.

During the reign of King Khalid Bin Abdulaziz, Souq Al-Qmashah, located on the southwestern side of the Prophet’s Mosque caught fire and the whole area was gutted. The area of the Souq was leveled and the owners of houses and properties were compensated. This area, which was 43,000 sq. meters, a spacious, shaded square, was added to the Prophet’s Mosque premises and a part of it was designated as parking space.

In 1405 Hijri, King Fahd Bin Abdulaziz ordered an exhaustive and elaborate study on a major expansion of the mosque and later the foundation stone for the expansion project of the mosque was laid. The project facilitated the accommodation of over 257,000 worshipers within a total area of 165,500 sq. meters.

The expansion included building a basement to accommodate air-conditioners plants, refrigerators, and other services. It also included surrounding the Prophet’s Mosque with courtyards of 23,000 sq. meters, the floor of which is covered with marble and granite, according to geometric shapes in various beautiful Islamic models. A total of 135,000 sq. meters of these courtyards were allocated for prayer, to accommodate 250,000 worshipers. The capacity increased to 400,000 worshipers if the entire area of the squares surrounding the mosque was used. This makes the capacity of the entire mosque and its surrounding courtyards to more than 650,000 worshipers, reaching one million worshipers at peak times.

King Abdullah Bin Abdulaziz launched the largest expansion project of the Prophet’s Mosque. Besides, a project was also launched to install convertible umbrellas at the Prophet’s Mosque. This increased the capacity of the mosque to accommodate two million worshipers by the time the project was completed. The 250 umbrellas were installed aligning the pillars of the squares of the mosque. These umbrellas cover an area of 143,000 sq. meters of the squares surrounding the mosque's four corners, where more than 800 worshipers can pray under one umbrella.

As part of the umbrellas project, 436 misting fans have been installed on 250 umbrellas covering the various squares of the mosque, which have an area of about 175,500 sq. meters and accommodate approximately 251,000 worshipers.

Custodian of the Two Holy Mosques has approved starting implementing development projects and operational and technical modernization of the sound system, light current systems, and electromechanical systems at the Prophet's Mosque and its courtyards according to the latest technologies available globally. The King has also approved developing sound, air-conditioning, and automatic control systems in the projects of the Prophet’s Mosque, in addition to developing parking lots and service buildings.

The Prophet's Mosque is also a prominent part of the Kingdom's Vision 2030 presented by Crown Prince Muhammad Bin Salman, deputy premier, and defense minister, which aims to refurbish the Two Holy Mosques and improve all services and overcome all difficulties, so that pilgrims, Umrah performers, and visitors find all the means facilitating the performance of their rituals in ease and comfort.

Al-Madinah Al-Munawwarah has many religious and historical places, which are an indication of the greatness of this town and its connection to the life of Prophet Muhammad (pbuh). One of these places is the Quba Mosque, which is in the southwest of the city.

The latest expansions of the Quba Mosque enables the gathering of about 20,000 worshipers. The northern part of the mosque has been designated for women with a capacity of more than 7,000 worshipers.

One of the most important landmarks for pilgrims and visitors to Al-Madinah is the Seven Mosques.

Al-Madinah Al-Munawwarah is known for its many mountains and valleys. Among the most important of these mountains is Mount Uhud and next to it is the Shuhada (Martyrs) of Uhud Cemetery, which includes the graves of 70 Companions of Prophet Muhammad (pbuh) who were martyred during the Battle of Uhud.

Between the slopes of Al-Madinah hills and mountains are valleys. These valleys witnessed ancient civilizations that settled in Al-Madinah or passed through it, as some of these civilizations were mentioned in the biography of Prophet Muhammad (peace be upon him) or discovered at this age through inscriptions and drawings that appeared on rocks as signs of creatures who lived on the land of the Arabian Peninsula during the pre-Islamic era.

Wadi Al-Aqeeq or the (Blessed Valley) is considered one of the most important of these valleys, as it is mentioned in many Ahadith (sayings of the Prophet — pbuh) that show its virtue and the beauty of its nature. Prophet Muhammad (pbuh) used to go out to enjoy its nice air and weather.