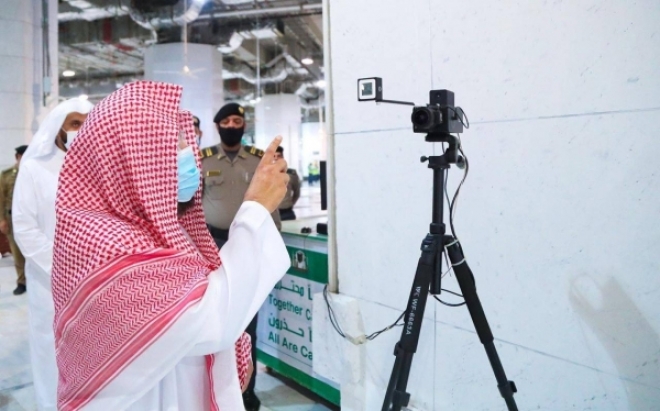 MAKKAH — The General Presidency for the Affairs of the Two Holy Mosques has swung into action to implement a series of precautionary measures and initiatives launched by Sheikh Abdul Rahman Al-Sudais, the head of the presidency, to receive pilgrims and worshipers at the Grand Mosque from Oct. 4.

The presidency’s plan to receive pilgrims and visitors focuses on providing the best and high-quality services and facilities in a way ensuring their safety from coronavirus.

These initiatives include the installation of highly advanced versions of thermal cameras equipped with high-resolution monitoring systems to issue alerts when high temperature is recorded for any of the pilgrims and visitors entering the Grand Mosque, which will allow the authorities to deal instantly with those suspected of being infected with the virus.

Al-Sudais also launched an initiative to handle masks, as well as the system to apply precautionary measures during the distribution of Zamzam water, in addition to sterilization and disinfection work at the Grand Mosque.

The presidency chief said that these measures are taken to ensure a healthy and safe atmosphere for the pilgrims and visitors to the Grand Mosque in order to prevent the spread of coronavirus.

“The presidency has begun quite early to prepare the necessary plans to receive pilgrims in direct coordination and cooperation with the health authorities in the Kingdom for the implementation of all precautionary measures inside the Two Holy Mosques,” he added.

The Ministry of Hajj and Umrah announced on Wednesday that the entry of Umrah pilgrims, worshipers, and visitors to the Two Holy Mosques will be regulated through the application “I’tamarna,” which will be available on smart phones effective from Sept. 27.

The app will enable the pilgrims and visitors to plan their pilgrimage and visit in advance, as well as to make a reservation of optional services to perform their rituals in ease and comfort, in addition to ensuring the compliance of the health and precautionary measures and preventive protocols, approved by the Ministry of Health and other competent authorities, to stem the spread of coronavirus.

The ministry said that the application will be available for users of iOS and Android operating systems seven days before the start of the first phase. The registration of the data entered by the pilgrims and visitors to the Two Holy Mosques will be directly related to the application “Tawakkalna,” the official app launched by the Ministry of Health to prevent the spread of coronavirus.

The Ministry of Interior announced on Tuesday the gradual resumption of Umrah and visits to the Two Holy Mosques with a limited number of pilgrims. In the first phase, citizens and expatriates from within the Kingdom will be allowed to perform Umrah at a capacity of 30 percent from Oct. 4. Foreign pilgrims will be allowed to resume their pilgrimage to the Kingdom to perform Umrah and visit the Two Holy Mosques effective from Nov. 1.

In March this year, the ministry announced the temporary suspension of the Umrah pilgrimage and visit to the Holy Mosques for both foreign and domestic pilgrims and worshipers as part of the precautionary measures that have been taken following the outbreak of the pandemic.