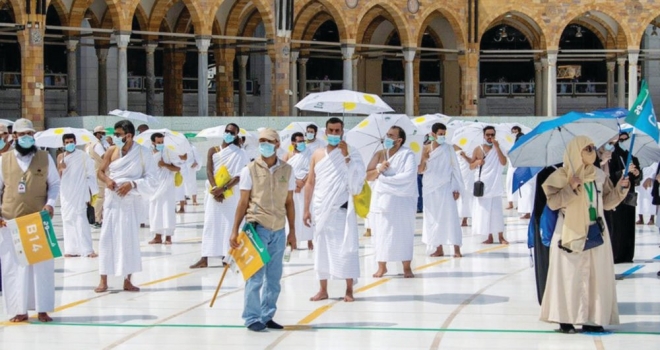 MAKKAH: Each pilgrim will be given three hours to perform Umrah, starting and ending in the triage areas around Makkah, during the first stage of the resumption of Umrah services, according to Arab News sources.

The first stage is scheduled to start on Oct. 4 and will be operated through the I’tamarna app.

The plan is to have triage areas around the holy city, allowing 6,000 pilgrims to perform Umrah each day at six different times, with each group of 1,000 pilgrims being given three hours.

Ahmed Bajaiffer, an investor in Umrah companies, said that the Saudi government had decided to resume Umrah services after their suspension due to the coronavirus pandemic “as it believes that Muslims should not stop performing pilgrimage, while respecting the precautionary measures.”

The first stage will allow Umrah for Saudis and expats residing in the Kingdom, before expanding to a bigger capacity in the next stages to allow pilgrims from outside Saudi Arabia.

Ahmed Saleh Halabi, a journalist and writer specializing in Hajj and Umrah services, said the decision to restore Umrah stresses the Saudi leadership’s concern to help people perform Umrah safely and securely, in line with the precautionary measures.

“The gradual restoration of Umrah might help mitigate the financial damage to the Umrah companies and institutions,” he told Arab News.

Halabi quoted the minister of Hajj and Umrah saying “there are more than 30 local and international companies that can handle the Umrah services provided for pilgrims,” and he hoped that this will not cause new financial losses to the companies providing Umrah services.