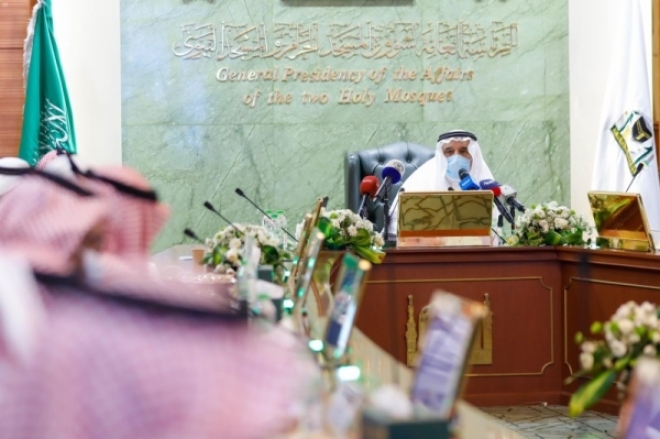 MAKKAH— Ahmed Al-Mansouri, the deputy head of the General Presidency for the Affairs of the Two Holy Mosques, said that no pilgrims suspected of coronavirus infection will be allowed to enter the Grand Mosque when the gradual resumption of Umrah service begins on Oct. 4.

Addressing a press conference on Thursday to brief on the arrangements made by the presidency prior to the beginning of Umrah and visits to the Grand Mosque, he said that the Ministry of Health has set up a number of fully equipped small-scale health centers to deal with suspected coronavirus cases.

Explaining about the presidency’s arrangements for Umrah performance, Al-Mansouri said that pilgrims will be allowed to enter in groups, consisting of 1,000 pilgrims in each group.

“The pilgrims will be guided in separate tracks from outside the Haram to the mataf (the circumambulating area around the Holy Kaaba) and there will be 16 leaders who will receive the pilgrims at the courtyards and direct them to the Grand Mosque.

Tawaf will begin in a spiral way and the pilgrims would directly proceed to masa’ (area for the ritual of sa’i between Safa and Marwah) after completion of tawaf and will exit the Grand Mosque through the gates of Marwah and Arqam after completion of sa’i,” he said, adding that the first track of the mataf will be earmarked for wheelchairs of the elderly and people with special needs.

Al-Mansouri said that women staffers of the presidency will return to work for the first time after the temporary suspension of the Umrah service. He said that the timing of Umrah will begin at 7 a.m. and end at 3 a.m.

“High-resolution thermal cameras have been installed all entrances to the Grand Mosque, with a ban on i’tikaaf and bringing in food and soft drinks into the mosque.

The presidency official said that the Grand Mosque will be completely washed 10 times a day before and after the performance of Umrah by the groups of pilgrims.

According to him, all toilets will be washed and sterilized six times a day. Carpets, wheelchairs, and escalators in the Grand Mosque will be regularly sterilized. Cleaning of air-conditioning systems and air filters will be done with ultraviolet rays a number of times in a day.