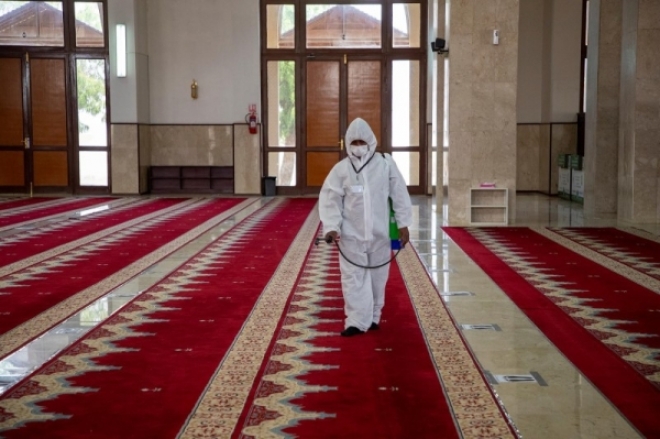 Saudi Arabia's Ministry of Islamic Affairs, Call and Guidance has completed all preparations in mosques and other facilities at meeqats prior to the gradual resumption of Umrah pilgrimage from Oct. 4.

Meeqat is the boundary where from pilgrims enter the state of ihram, and it is impermissible for Umrah pilgrims to cross this boundary except in the state of ihram. These include Taneem in Makkah, which is the nearest to the Grand Mosque, Abyar Ali, formerly Dhul Hulayfah near Madinah, and Al-Sail Al-Kabir, formerly Qarn Al-Manazil, 50 km from Makkah on Makkah–Riyadh Road.

Meanwhile, Minister of Islamic Affairs, Call and Guidance Sheikh Abdullatif Al-Sheikh announced the completion of the ministry’s preparations to receive pilgrims in accordance with health protocols approved by the competent authorities.

“Since the issuance of the order for the gradual resumption of Umrah, the ministry has worked out to make available all the arrangements to enable the pilgrims to perform the rituals in ease, comfort, and safety in accordance with the highest quality standards. Apart from hiring Saudi companies specialized in sterilization and hygiene, the ministry has mobilized all its resources to provide the best services to the pilgrims in all the responsibilities and tasks assigned to it,” he said.

According to Al-Sheikh, the ministry has also assigned a number of preachers to carry out Islamic awareness, in addition to entrusting a number of maintenance and operation monitors to follow up the works and evaluate the services provided to the pilgrims around the clock. The minister also reviewed the readiness of the facilities to receive pilgrims through a virtual tour on Thursday.

More than 20,000 square meters of carpets and prayer rugs in all the mosques at the meeqats were sterilized, in addition to concluding contracts with a number of Saudi cleaning and maintenance companies to carry out sterilization works round the clock basis.

The ministry has tasked 769 officials and workers in all these mosques apart from hiring a number of male and female preachers to enhance religious awareness among the pilgrims through lectures and classes and clarifying doubts on religious matters, in addition to underlining the need for total compliance with the precautionary measures and preventive protocols to stem the spread of coronavirus.

The preparations include putting stickers on the floor for a physical distance of two square meters between each pilgrim; sterilizing carpets, floors, and entrances and exits of mosques and toilets round the clock; placing instructions and guidelines in different languages; provision of electronic copies of the Holy Qur’an instead of the manual ones; ensuring hand sanitizers, and installing thermal cameras at the entrances.