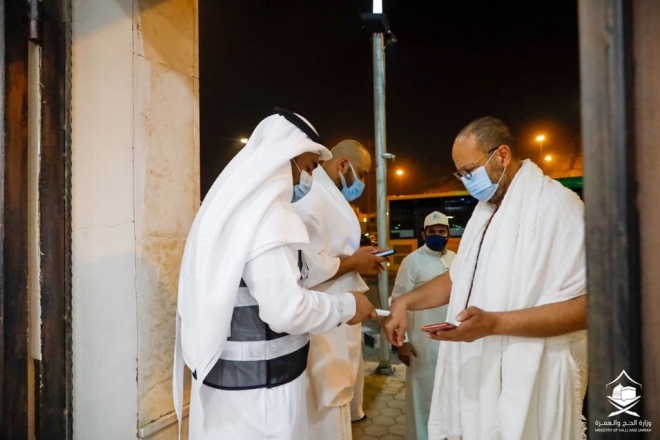 JEDDAH: After more than six months, with the exception of Hajj, Makkah’s Grand Mosque has opened its doors to the first group of pilgrims performing Umrah in a welcome sign of a new beginning.

More than 1.8 billion Muslims worldwide will rejoice as the first lucky Umrah pilgrims enter the mosque at 6 a.m. on Sunday after applying through the Ministry of Hajj and Umrah’s Eatmarna app.

To accommodate a quota of 6,000 pilgrims per day, the Ministry of Hajj and Umrah has prepared five meeting points, including the Al-Gaza, Ajyad and Al-Shasha sites, where pilgrims will meet and join health professionals on buses to the Grand Mosque.

To welcome the first arrivals, thermal cameras will be placed at the entrances and inside halls of the Grand Mosque to monitor body temperature spikes and issue alerts if necessary.

The plan was devised at the start of the pandemic to ensure visitor safety and allow a rapid response to potential virus cases.

The General Presidency of the Affairs of the Two Holy Mosques, in cooperation with other authorities, has completed preparations to receive the pilgrims with strict precautionary and preventive measures. About 1,000 employees have been trained to monitor the rituals of Umrah in the Grand Mosque. The mosque will be cleaned 10 times a day between each group’s presence. Further cleaning of high-traffic areas will also be conducted, including fountains, carpets and bathrooms. Escalators leading to the top floors have also been equipped with cleaning devices, while hand-washing devices have been placed at the mosque’s entrances.

With a capacity for 2.5 million pilgrims, the circumambulation area (Mataf) around the Kaaba was chosen for Umrah pilgrims to perform rituals. Designated pathways, similar to the Hajj pilgrimage in August, have been introduced for ease of access.

The president of the General Presidency of the Affairs of the Two Holy Mosques, Sheikh Dr. Abdulrahman Al-Sudais, referred to the royal approval of King Salman, which allowed pilgrims to perform Umrah in the Grand Mosque and visit the Rawdah in the Prophet’s Mosque while complying with preventive measures.

Al-Sudais said the royal approval reflects the Saudi leadership’s keenness to ensure the safety of the holy mosque’s visitors and comes in response to Muslims’ desire to perform Umrah.