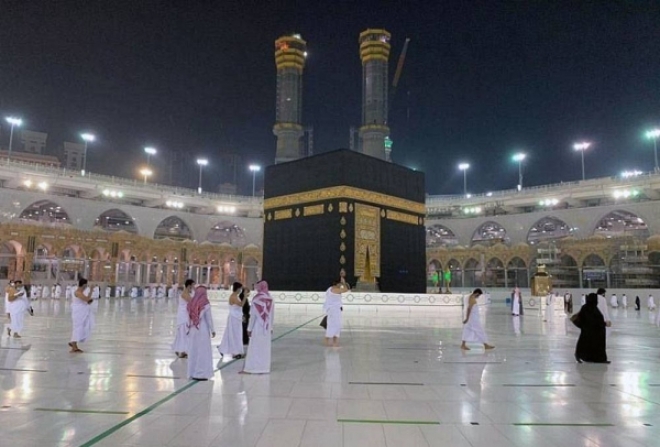 MAKKAH — The Ministry of Hajj and Umrah, in cooperation with the concerned authorities, received here after midnight, the leading group of Umrah performers from inside the Kingdom.

This step came in implementation of the royal directives to allow the performance of Umrah and visit gradually based on four stages, while taking the necessary health precautionary measures as well as in response to the aspiration of Muslims at home and abroad to perform the rituals of Umrah and visit.

According to the strategic plan developed by the government agencies, the first phase of resuming Umrah will witness small numbers that do not exceed 6,000 Umrah performers per day, and each batch will be allocated only 3 hours to complete Umrah rituals, allowing the application of this plan amid high level precautionary measures.

Arrival of the first batch of Umrah performers (citizens and residents) from different parts of the Kingdom of Saudi Arabia began at 12:00 midnight under the follow-up and supervision of the Minister of Hajj and Umrah Dr. Mohammad Saleh Benten.

The Minister directed the Ministry's sectors, agencies and Umrah companies to raise the degree of readiness and complete preparations to serve Umrah performers and visitors according to the highest standards in providing services in addition to applying all precautionary measures and using all technological systems and electronic programs so as to facilitate procedures and provide all services with speed and mastery. — SPA