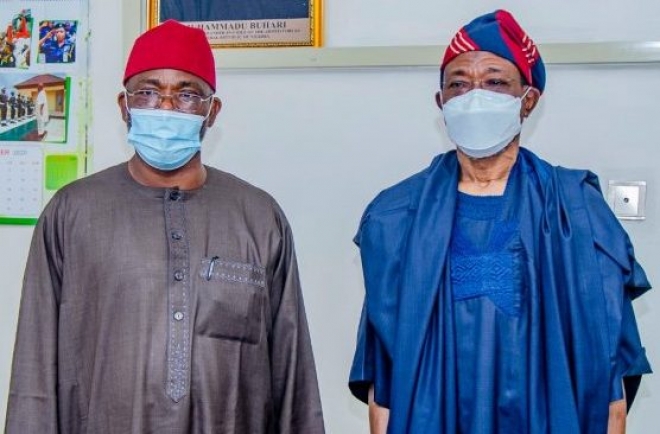 The Ministry of Interior and the National Hajj Commission of Nigeria are collaborating on the Makkah Route Initiative to ease Hajj operations for Nigerians.

The initiative would involve the screening of intending pilgrims from the Nigeria exit point in order to eliminate the long hours in screening at the point of entry to Makkah.

NAHCON is expected to invite officials involved in Hajj operation from Saudi Arabia to conduct the exercise with Nigerian authorities.

The Minister of Interior, Rauf Aregbesola, pledged to give support to the actualisation of the initiative, adding that all agencies under the ministry would be involved in it.

Aregbesola said: “I welcome you.

“I promise you all the support of the Ministry and its Agencies.

“We eagerly await the arrival of the Saudi officials that will fully elaborate what the initiative is all about.

“But from what I read and heard, you can count us as worthy partners in the successful inclusion of Nigeria in the Makkah Route Initiative, which is meant to remove and bring to the barest minimum stress, difficulties and challenges that pilgrims face in the discharge of their religious duties.”

The Minister added that countries like Malaysia, Indonesia and Pakistan are all enjoying the initiative and would be glad to see Nigerians enjoy the same.

Alhaji Zikrullah Hassan, NAHCON Chairman/CEO, while briefing the Minister, said the Ministry’s role in the success of the initiative was significant.

Hassan explained that the project, which would be the first in Africa, is expected to bring relief to intending pilgrims from the decades of multiple screenings in both Nigeria and Saudi Airports.

He said: “It takes from three to five hours to screen a flight conveying Nigerian pilgrims to Saudi Arabia after landing in either Jeddah or Madinah Airports.

“But with this initiative, the pilgrims will be screened by the Saudi authorities’ right from their origin airport.

“After landing, they will only be left to sort out their bags and proceed to their hotels as all necessary security checks will be concluded here in Nigeria.”

Hassan added that the Saudi Arabian Authorities will send a delegation to Nigeria in order to assess the level of preparedness of the commission and relevant agencies towards the initiative.

The NAHCON boss said this was the purpose of the visit in order to intimate Aregbesola and ensure Nigerians enjoy “the chance to be part of the Makkah Route Project”.

The Saudi Arabia’s Deputy Minister of Hajj, Abdul Rahman Al-Bijawi, during the 2019 Hajj, had urged Nigeria to exploit the new initiative for improved service delivery.

Al-Bijawi said the Makkah route project has already been implemented in five countries, with Pakistan being the latest to join.

He advised that Nigeria can start by giving it a trial, saying: “You can give it a try even if it is in one state.

“It takes 20 to 25 minutes to process an entire aircraft.

“There is no need for Immigration, Customs or Anti-Narcotics Department to screen the pilgrims after they have landed.”


⇐ Previous:
250,000 Umrah pilgrims to be allowed in second phase
Next: ⇒
60% of hotels and shops in Makkah are preparing to start operating