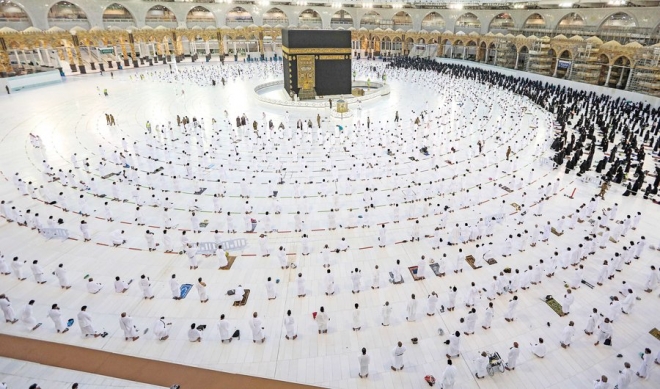 ISLAMABAD: Pakistani pilgrims arriving in Saudi Arabia this week for Umrah said they felt blessed to be among the few hundred foreigners performing the holy ritual, following a loosening of travel bans to check the spread of coronavirus.

Saudi Arabia closed its borders in February to foreign Umrah pilgrims and, in March, stopped its own citizens and residents from taking part in order to contain the spread of the virus. In July, the Kingdom allowed a limited number of domestic pilgrims to perform Hajj.

Umrah can be performed at any time of the year in contrast to Hajj, which has specific dates according to the Islamic lunar calendar. “I am feeling blessed as I was waiting for this moment for the last seven months,” Pakistani pilgrim Umair Mushtaq, who is leading a group of 38, told Arab News from Makkah.

He praised the arrangements ministries had made for pilgrims at Jeddah airport.

Saudi authorities have made arrangements according to WHO instructions.

Pakistani pilgrims arrive at hotels to undergo a three-day quarantine before they are allowed to perform Umrah. (Photos/Supplied)

“The Saudi Ministry of Hajj gave us very good protocol. They are providing us food in the (hotel) room for the first three days, which is the mandatory period of quarantine.”

Pilgrims have to take a coronavirus test after three days before they are allowed into the Grand Mosque to perform Umrah.

I am feeling blessed as I was waiting for this moment for the last seven months.

“I feel out of this world,” Musadaq Malik said after arriving in Makkah on the first flight carrying Pakistani pilgrims. “Only a few hundred people got this chance of performing Umrah out of the total 1.5 billion Muslims in the world. I don’t have words to explain my feelings. I am waiting anxiously for the remaining two days to pass so that we can finally perform Umrah and offer prayers in the Grand Mosque.”

He thanked Saudi authorities for their welcome at Jeddah airport. “They have made arrangements according to WHO (World Health Organization) instructions,” he added.

Sajid Masood, Pakistan’s director of Hajj in Jeddah, said that Saudi Arabia had changed all protocols so that pilgrims could observe coronavirus precautions at airports.

He said authorities had also installed thermal gates at various places to check the spread of coronavirus.