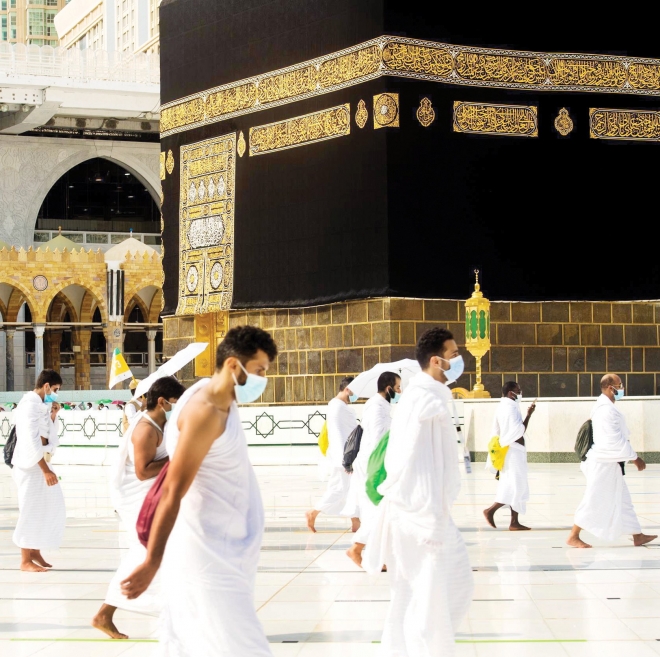 MAKKAH: Some 10,000 international pilgrims are arriving in Saudi Arabia after a seven-month hiatus to perform Umrah and visit the Prophet’s mosque on the first day of the third stage of the resumption of Umrah.

According to Deputy Minister of Hajj and Umrah Dr. Amr Al-Maddah, the 10,000 pilgrims arriving from abroad must first obtain a permit. Upon arrival, pilgrims must isolate for three days before being transported to Miqat sites, principle boundaries at which pilgrims intending to perform Umrah must change into Ihrams.

The deputy minister added that countries are subject to continuous evaluation by the Saudi Center for Disease Prevention and Control and the Ministry of Health as part of the government’s approved standards and protocols. Visas for pilgrims arriving from countries that are seeing a noticeable increase in numbers will be placed on hold until further assessment.

With the start of the third stage, the holy mosques will be working at 100 percent operation, a pivotal stage for companies in the sector.  Al-Maddah added that if at any stage there is a cause for concern or danger to pilgrims, the ministry will evaluate the situation and return to previous stages and decrease capacity.

Currently, Saudia is the only certified airline allowed to transport pilgrims to and from the Kingdom. Pilgrims arriving from countries from which the carrier does not operate must arrange through a third party, accounted for by the Kingdom.

Pilgrims must have a health guide provided by Umrah companies to monitor each group throughout their visit. Pilgrims must also have full health insurance that includes emergency treatment if infected and a possible PCR test.