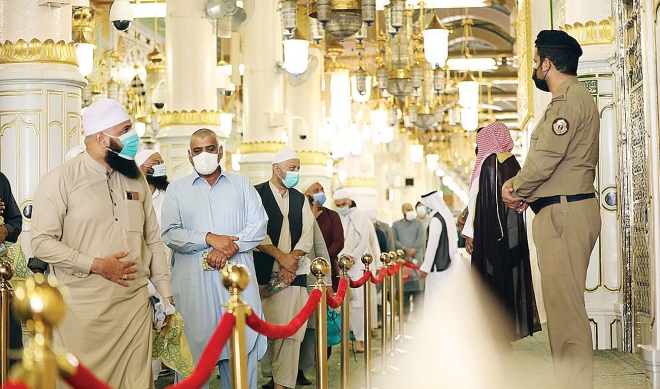 MAKKAH: As the Kingdom is getting back on track after earlier lockdowns, plans to maintain services for pilgrims while adhering to strict health protocols are proving a success.

Saudi Arabia’s Ministry of Hajj and Umrah said that 788,038 people had performed Umrah in total since the gradual resumption of Umrah rituals began on Oct. 4. The third phase, which started on Nov. 1, permitted pilgrims from abroad to perform the ritual alongside residents of the Kingdom.

Saudi Arabia suspended Umrah in March and significantly downsized the Hajj pilgrimage in July by only allowing about 1,000 pilgrims, all in response to the COVID-19 pandemic.

In an interview with Arab News, Dr. Amr Al-Maddah, undersecretary at the Ministry for Hajj and Umrah, noted that all visas from abroad that have been filed through accredited agents and the offices of certified Umrah companies have been accepted, provided they fulfilled the necessary requirements.

He said that tourist offices abroad are following their contracts with the Ministry of Hajj and Umrah so that pilgrims can come to perform Umrah rituals.

Meanwhile, Sheikh Abdulrahman Al-Sudais, president of the General Presidency for the Affairs of the Two Holy Mosques called for an increase in the number of paths around the Kaaba to accommodate the increased number of pilgrims performing Umrah and to allocate paths for the elderly and people with disabilities, as well as paths for those in wheelchairs.

Al-Maddah said that during the third phase, the regulatory protocols will be reviewed to streamline services for the pilgrims and assess any required changes.

Those applying for Umrah from abroad must be between 18 and 50 years old, in accordance with the requirements of the Ministry of Health. They must also submit their COVID-19 negative RT-PCR test, issued by a reliable laboratory and taken 72 hours prior to leaving for Saudi Arabia.

Al-Maddah stressed: “Pilgrims who have booked only an appointment for prayer cannot perform Umrah because they will not be able to enter the Tawaf area.”