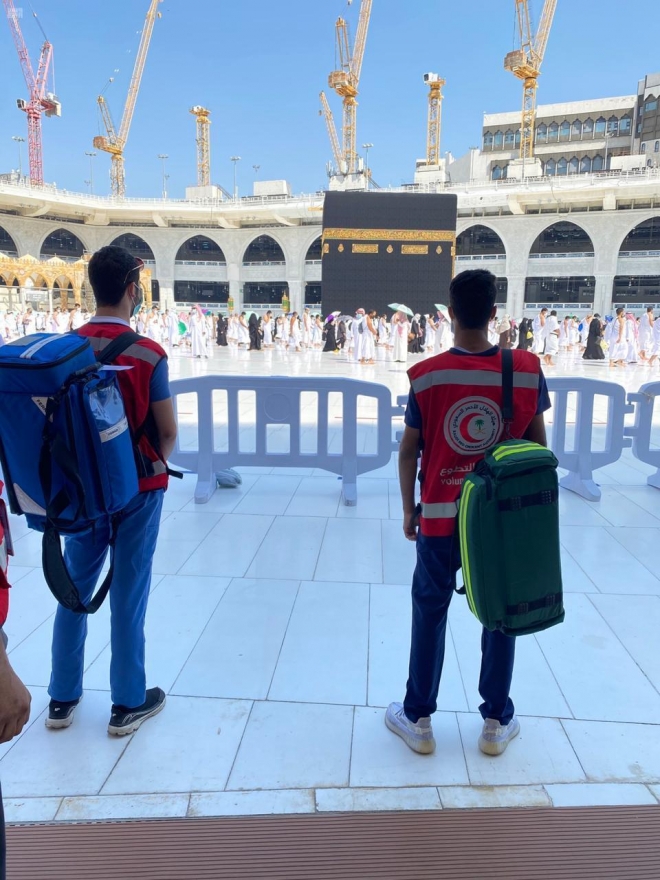 MAKKAH: The Saudi Red Crescent Authority (SRCA) has confirmed that a large number of people have stepped up this year to volunteer in Makkah’s Grand Mosque, eager to serve pilgrims after months of the mosque’s closure due to the novel coronavirus disease (COVID-19) pandemic.

Only a small number of volunteers were taken in, however, due to the need to maintain social distancing and ensure the safety of pilgrims.

Director of the voluntary work at the SRCA in Makkah, Hanaa Al-Shamrani, told Arab News that in the first week of Umrah, volunteers were eager to serve pilgrims.

“Applications were received from all Saudi cities and towns without exception, but due to the current circumstances, the SRCA only accepted applications from Makkah to provide quality services in line with predefined health protocols,” she said.

Over 300 volunteers, including doctors, engineers and health practitioners, are providing first-aid services and raising awareness among pilgrims regarding the measures necessary to prevent the spread of the virus, such as observing social distance and wearing masks.

Volunteers speak Urdu, English, and Turkish, among other languages they have acquired over the years by coming into contact with pilgrims during the Hajj and Umrah seasons in Makkah.

“First-aid services are mainly provided for patients with diabetes and blood pressure issues, as well as those who have been exposed to heat stress and sunstrokes and those suffering from small wounds,” said Al-Shamrani. “Volunteers deal with these cases in a very professional manner, and serious cases are sent to nearby hospitals.”

She added that before the pandemic, volunteers used to distribute gifts to pilgrims, including prayer beads, rugs and light snacks, but this is no longer possible due to the virus.

“Volunteers have been providing various services in all the mosque’s corners, covering the halls, squares and prayer places allocated for women,” he said.


⇐ Previous:
Number of Haj Pilgrims from Bengal to be Halved in 2021 Due to Pandemic
Next: ⇒
Tanaqqol app helps 2k pilgrims reserve electric cars