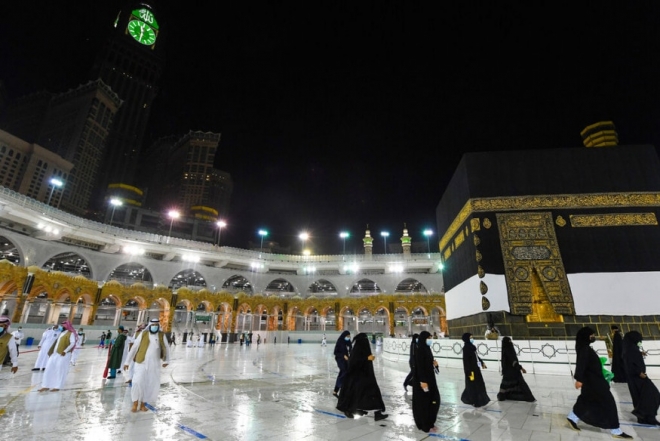 The number of Haj pilgrims from the state will be halved next year due to the pandemic, a senior member of the West Bengal State Haj Committee said on Wednesday. The cost of the Haj pilgrimage next year will rise due to the safety protocols, he said.

The state Haj committee has received 1,100 applications since November 10 from people living in different districts of the state expressing interest to go on a Haj pilgrimage in 2021, he said. "The situation is grim and travelling is quite a challenging thing amid this pandemic. This time we will only be allowed only 3,500 to 4,000 pilgrims to go on Haj in 2021. The cost of individual pilgrims will also be increased owing to the safety protocols," the member of the state committee told PTI.

From Bengal, in the pre-COVID-19 time at least 9,000 pilgrims used to go on the Haj pilgrimage annually, he said. "But due to the situation, the Haj Committee of India has decided to allow only one-fourth of the total number who are allowed to take the Haj pilgrimage," he added.

The member said that there will be no limitations of accepting the number of applications seeking to go on Haj pilgrimage, but the final decision will be taken by the state committee only after a proper screening of their health. "Proper medical screening will be done to check whether these people are having serious health-related issues or not. Any person having any serious medical condition will not be allowed to travel this time," the member said.

In fact, it would be for the first time that the state Haj committee, after screening the applications, will go for the lottery system to select the pilgrims, he said. "This year we are not accepting any application fee.

Only after screening the applicants' medical health, we will choose them through lottery. After that we will accept Rs 1.5 lakh in advance and the requisite documents like passport, Aadhaar card from selected people to initiate the process of their travel," the member elaborated. Till November 17, the committee has received 1,100 applications mostly from Murshidabad district besides, Malda, North 24 Parganas, South 24 Parganas, Uttar Dinajpur and Kolkata.

The applications will be accepted till December 10 and the lottery will be conducted in January, the member added. On the reason behind the increase in the cost of travel for an individual to take the Haj pilgrimage, he said that earlier six persons used stay in one room but due to pandemic only three will be allowed.

"The cost of living there in Saudi Arabia's Mecca is quite high and now only three people will be allowed to stay in one room where earlier we used to accommodate six. So the costs are increasing by leaps and bounds," he said. People earlier used to spend around Rs 2.65 lakh to go on Haj pilgrimage, will now be required to cough up Rs 1.75 lakh more, he said.

The Haj is an annual Islamic pilgrimage to Mecca, considered to be the most holy city of the Muslims. The next year's Haj is likely to take place in mid- July.

The Minority Affairs department had cancelled travel of Muslims to Saudi Arabia for this year's Haj after the kingdom conveyed that pilgrims should not be sent this year in the wake of the pandemic.


⇐ Previous:
Istisqa prayer performed throughout Saudi Arabia
Next: ⇒
Volunteers step up to provide services to worshipers in Makkah